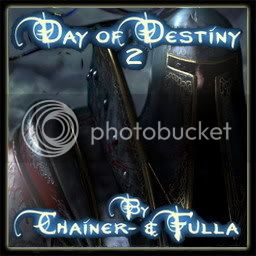 Heroes battle it out in a epic war between The Alliance & The Scourge.
When chaos is at it's peak, champions will rise to meet their destiny.

A 6v6 AoS, i've been developing and working on for the past 6 months or so. It generally follows the same gameplay and concept as most other AoS maps out there, mainly inspired by Dota as well as DoE & AoM.
Im trying to stick with the simple concept of "Easy to learn difficult to master" yet still adding quite alot of new content

Each side is uniquely different with their own specialised Gods, Heroes, Units, Items, Consumables & Recipes.
This allows you to switch sides now and then whenever you fancy a change or get bored of one of the sides.

The Overal pace will be alot faster than the typical AoS's out there. Generally aiming for 5-15 min games.
Games wont get dragged out, once a team is clearly winning, it will be easy for them to end it there and then.

Attributes - Strength / Agility / Intelligence play a much bigger role
All abilities & consumable power levels are dependant on your attribtues.

So apart from leveling up abilities to them stronger, your stats will also make them stronger. A few examples:


Consumables also follow a similiar pattern such as potions, scrolls, wards, talismans etc.
Therefore all spells and consumables should be good through the game.

All abilities and effects can stack without becoming imbalanced. Effects such as:
- Evasion
- Spell Resistance
- Life Steal

The Gods are ever watchful, always seeking a new champion to fight for their cause.

At the start of each game, a player may choose a Deity to affiliate with or else choose 'Undivided'.
Each God/Undivided grants an active ability as well as a few passive 'gifts'.

I'm eventually aiming for 7 unique Gods +1 Undivded per Faction..
This should add a huge variation to the game as whatever Hero you pick, there will always be 8 different ways you can play him.

The Gods themselves ofcourse will be very diverse, ranging from Gods of Chaos, Pestilence, Order, Wisdom, Void etc.
Each granting unique potential onto a Hero.

Most AoS's on top of standard unit/hero kills have a constant gold rate/income generated every few seconds.
On Dota its round about 7 gold every 7 seconds (or basically 1 per second).

In DoD2 instead we have a shared bounty system.
Bounty is shared similiar to experience. So long you are nearby when a unit or hero dies you will get a 'cut' of the bounty.
Thus just like expierence the more Heroes nearby the less gold you will get, any allied creeps nearby will count together as '1 Hero'.
So e.g You + creeps kill a unit - 50% each / You + an allied hero + creeps kill a unit - 33% each.

If a Hero kills a unit, he himself will gain the full bounty.
This allows players to still last hit, i.e. 'the pro's' to still gain advantages with skill and practice but not leave beginners in the dark.

Overall the system encourage Heroes who remain in the heat of battle to be rewarded:
- Escape/defensive items actually become worthwhile, e.g. blink, speed boost etc.
- Other types/roles of Heroes become worthwhile
- Mass ganking, i.e. 4+ Heroes travelling across the map together is less rewarding

More features will gradually get added in the future and I will update this thread:

Maps 7
It sounds really interesting to me!!!

Maps 3
I like abilities that depend on stats instead of ladder abilities (did similar stuff myself in my abandoned AOS project). The god concept seems really interesting too.

Unfortunately I think most people will think its too complicated with attribute based skills and stick to playing dota :/

Maps 1
nice ideas, hope you pull this off

i wont be using your ideas for my map, since im currently working on #2 and have planned most of the major things up to #5, and it would be kind of stealing, so


Arkan. said:
I like abilities that depend on stats instead of ladder abilities (did similar stuff myself in my abandoned AOS project). The god concept seems really interesting too.

Unfortunately I think most people will think its too complicated with attribute based skills and stick to playing dota :/

Have you played Legends of Eternity? It had a similar attribute system, and it was even more confusing cause you couldnt tell what attributes did what to what ability. It was also very imba, many stuns and stuff, but it became quite popular for a bit.

Though about the tooltips, I liked what you did with DoD before Like this:

Hurls a bolt of lightning that can bounce onto enemy units. Deals 500/600/700% of intelligence as damage but is weakened each bounce. Every 10/9/8 agility increases the number of bounces by one.

Tutorials 2
thx for the prostive replies guys.
Ill begin to update this thread as I get more progress.

Im strongly considering reducing the lanes from 4 to 2, as I love the ideas of:
- 3 Heroes per lane (Lots of teamwork).
- Lower impact of leavers (Dont get spread to thin.)
- Speeds up gameplay

Tutorials 2
Well I mainly meant say roughly half the size of the current Dota map/terrain. Would mean everyone is alot closer together, hoepfully increasing the intensity and chaos.

Models 10 Maps 2
2 lanes sounds good, but I dont think they should be that close, because it would make gangs so incredibly easy.

Maps 2
but then again shouldnt make em too far apart

Taur said:
2 lanes sounds good, but I dont think they should be that close, because it would make gangs so incredibly easy.
Click to expand...

I like the idea of teams naturally coming together in groups, instead of having to scream at your team to help you push a lane.

Models 10 Maps 2
but I've seen that a lot in some games of like DoE, we all just push 1 lane, and the enemy pushes back and soon it's 4v4 on one lane, it's not as fun as it sounds. A gang should be like 3 on 2 or something, but when you have like 6 heroes fighting each other, it gets really chaotic.

Maps 1
I must agree with Fulla here

since, the team to control chaos best does really deserve to win, am i right?

Models 1 Icons 4 Skins 1
Sounds great!At least not like the former DoD.
How much time did it took you to make it?

Maps 2
Wow the screenies look beautiful.
Pm me if you need a tester.

Models 10 Maps 2
meh still dont like it, it's going to end up like you only living a 1 or 2 minutes at a time.

UchihaSasuke.gr said:
Sounds great!At least not like the former DoD.
How much time did it took you to make it?
Click to expand...

DoD2 I assume you mean?
On & Off for quite a few months.

You can still stay with the creeps/towers and there will many defensive consumables you can invest in, to increase your survivability.

Tutorials 2
Yup, that kind of stuff.
Am possibly intending to tie your stats/attributes into consumables as well (Just like abilities). So they are strong all the way through the game.

Models 1 Icons 4 Skins 1
What do you mean with your last post?

Maps 2
i think he means, like get something, left click it, and itll permanently increase x stats by x amount

Maps 2
Consumables based on stats sound like a great idea.

So a potion would heal more hp for str hero and less for int while dmg + would be better for agi right?

daw_guy said:
Consumables based on stats sound like a great idea.

So a potion would heal more hp for str hero and less for int while dmg + would be better for agi right?

huh? that makes no sense daw_guy

Skins 2
Wow, this map is very good! For an alpha I am impressed!

Maps 2
Do any consumables add to ALL stats or do they just add to a certain stat, an do any of them increase only health and mana?

Models 10 Maps 2
No... what fulla means is that the stats of the potions (e.g. how much it heals, etc.) will increase with your attributes, e.g. more strengths heals more HP.

Models 1 Icons 4 Skins 1
Ok,so intelligence heroes that doesn't have much life won't be healed as much as Strength heroes.

Models 10 Maps 2
that's probably how it will work

Maps 2
and strength with low int will have slow mana regen? if so, then i get it now

Tutorials 2
Those are some of the possibilities.
Im definetly considering a few temporarily attribute boosting potions:


Ofcouse some misc potions varying on there abilities, bonuses & effects:


I'd also like to experiment with some offesnive consumables, inspired largely by Elimination:


Any suggestions or feedback is welcome ofcourse.
Last edited: Oct 11, 2007

Depend on how much it costs and if it stacks, that would acually be a VERY good item..

Tutorials 2
Yea remember all the abilities/other items are based on your attributes.
So a temp boost can have a big impact, if your casting multiple spells + consumables in succession.

Maps 2
so wait, if a fire bomb is consumable, how do you throw it?

Keep working on it, please. I really want to play it.

Models 10 Maps 2
have you not played elim or anything? click on the item, choose the point and it'll fire. And yeah if those attribute potions stack.. +like 15 strength and then cast your ulti... though you might want to increase it to like 10, not sure.

Models 1 Icons 4 Skins 1
Hmm..Yes,it's pretty good then.Now i think that 12 seconds is imba.xD
Waiting for updates?One question:
All the hero abilities are triggered?

Models 10 Maps 2
How can they not be triggered if they're all based on attributes?

Maps 1
they could be upgraded by a trigger that fires every 1 second that sets the level of the skill to the amount of int/str/agi, but that would be very complicated

Tutorials 2
Yea ofcourse they will all be triggered.
I'd like to not overcomlicate it thou, so you may get quite a few 'upgraded' blizzard spells, such as - Breath of Fire, Black Arrow, Lifedrain etc. etc.
-

Tutorials 2
No those were just samples.
Will all be war3 like.

Models 1 Icons 4 Skins 1
OK.I think that more enhanced interface would fit to a map like that.Anyway.How the description of hero abilities will be?

Tutorials 2
I posted a sample on first page.

After seeing what Rising_Dusk made in Desert of Exile (Inspired from Guild Wars), its has also inspired me to make a condition/effect system. I wanted to take it a little bit further thou.
Basically this is simply grouping up effects into simpler 'general' categories.
Here are some examples that can be used with abilities & items.


Working some general ones as well, such as enfeebled, slowed, amplified etc.
If anyone has any other ideas for damage overtime ones, would love to hear them.

Models 1 Icons 4 Skins 1
Nice.It seems that you put lots of new and unique things on the map!Good work!

Models 10 Maps 2
Silence, cripple, maybe some kind of condition that causes you to take extra damage from spells or attacks (or both), I dont know if stun should be a condition...

Maybe you might even want to have positive conditions, like invulnerability, or heal or speed boost or something
You must log in or register to reply here.