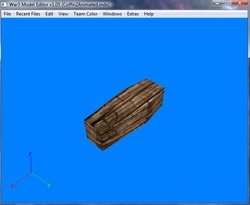 I made those two Coffin models for a request by Piwlady and Pharaoh_.
Uses only ingame textures, has 20 polies, was custom animated by me with Milkshape 3D.
The animations are birth stand, death (bursting), morph (opening) stand alternate (opened) and morph alternate (closing).
It also has a simple Portrait.
Here's an ingame picture of both coffins:

I also made a little Testmap:
Coffin Testmap

Please give me credits if you use it in your map/campaign!

Have fun with it!