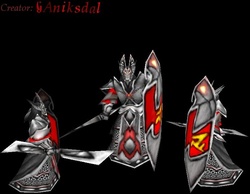 This is the second skin of the Black Elf race.

Description: The Black Elves are a race in Keiji's Dawn of Life. Their skin is of an ash gray and their hair is black. Their eyes are of that of a demonic red glow, as they were once corrupted by a demon. The Black Elves tend to wear very spiky armors. Scaly, and mostly consists of dark iron or silver. Ravens are also a very fond theme, so they use much black feathers on their equipment. For clothing almost all dark colors are very attractive, and the lust of wearing the bones of slain Demon opponents is popular, in order to show the demons just how superior they are.

Update 1: added some stuffs and removed some TC.
Update 2: made gold armour some places + added small shading.
Update 3: a little more TC and a smaller amount of gold.
Update 4: replaced the gold, added some highlights and shading.
Update 5: added a pentagon, and replaced the purple..
Update 6: darkened..
Update 7: bringed back the mark at the shield and changed the blade.
Update 8: Reworked the face shield and added some chain mail, and made some other changes.
Update 9: reworked the eyes, shoulder pad, fixed the chainmail, etc.

and plz give credits if use

Moderator
~ Moderation list refreshed. Hawkwing: No offense, but you really need to work on colour schemes. You've thrown it off a bit with the yellow and red on the shield. Also, you're starting to really lean away from the whole idea of Black Elf. Work on...
Read full review...
Reputation Statistics
Page 1 of 3
Show Ignored Content
Page 1 of 3