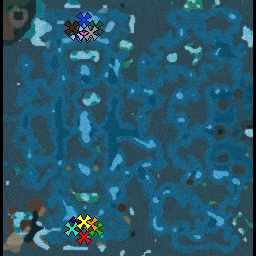 This is the last public Battleships Antarctica demo. It usually hinks one or two versions behind the current Betatest version. In order to become member of the closed beta, send me a pm.

Due to the Admin System included in this map, this map is closed source. Once this map reaches released status, an unprotected version without the admin system and without version image (as seen in the base) will be released.

This map was created from scratch.

This is a prealpha. Many things are still missing, but the map (in its basics) is perfectly playable.

Still Missing:
- Some Lesser Features
- Many Ship weapons
- Most skills
- Most ship abilities
- Action Point System
- Tooltips showing the requirements and cargo hold of ships.
- Clarification of what ship is good versus which one

Battleships Antarctica is a map that was planned as a custom Battleships version. During the last year, however, the gameplay has changed a lot and now it is hard to associate this map with the true Battleships genre.

First of all, the whole weapon system is completely different. While in all Battleship-Style maps, weapons come in the form of items that automatically fire at will, this map introduces ship weapons. That means that there are no items that represent weapons, instead every ship will have a set of onboard weaponry (that mostly fire at will).

Damage per second of weapons can be increased by upgrades that are in the ships inventory at startup. The upgrades are purchased by clicking on them (quite much like in battletanks). Note that your ship cannot attack while upgrading.

Note that all ships need some upgrades before they can be purchased. For example, a Battleship of stage one needs Weapon Damage and Ship Hull on level 2 each in order to be purchased, while a Cargoship of stage one needs Ship Sails on level 2.
// Requirements are implemented, but not shown in version 0.35. You will just get an error message which requirements you don't fulfill on ship change.

Secondly, there is a neutral hostile force in the game (comparable to the goblin empire in battleships crossfire, but without human players) that constantly sends creeps into the right lane. Traders, beware!

The third thing is the trade system. In most other BS maps, trading works like this: You get a contract, and then you patrol between the target location and your trademaster until you can get the next contract. In Bs Arc, however, you trade by buying and selling trade items - like wood or luxury goods. Every city has certain buying / selling prices for each resource, and you make profit by buying cheap and selling expensive (There are towns where you get a trade resource for free).
The profit on trading depends on multiple factors:
Your Cargo (More Cargo == More Carriable freight == More Total Profit)
Your Profit Upgrade (Profit Upgrades increase the amount of gold you get for selling trade items)
The route you are taking.
etc etc.

//Needs to be implemented yet:
The fourth thing are "Ship abilities". Every ship has a few "action points" (Like Mana), that allows them to do ship-type specific actions. For example, Cruisers can target all their weapons on a certain enemy for a few seconds.
Action points do not regenerate themselves; Ships need to return to the Kontor in order to refill their action points.

Normal (learnable) Ship Skills are not affected by this.

And lastly, upgrading to a better ship consumes experience. That might seem drastic, but it is needed in order to balance the higher hit points, the better skills/abilities and the stronger weaponry.

Get a better ship as soon as possible. Especially at the beginning - the 1k is really not much for more hit points and the stronger weapons.

Don't invest money into high level upgrades if you don't need them.

If you have a trader in your team, kill the pirates as soon as possible. They are quite nasty otherwise.

Use -h index to get an overview over all the help topics ingame.

Map Info View Resources In Use Preview Triggers
Reviews
21:56, 30th Jul 2010 ap0calypse: Approved Try to use BB-codes in the description though, to make it more appealing.
Read full review...

Try to use BB-codes in the description though, to make it more appealing.

Icons 4 Maps 16
Fix map description. From one germanish word to many english words.

Icons 1 Maps 1
Not mentioning us betatesters?

I actually did mention you, you are on place 4

Any Personal Comments?
Love your vJass coding, and couldn't find a flaw.

Maps 2
Nice update from old version, although the description can be improved with these BB Codes.
You must log in or register to reply here.