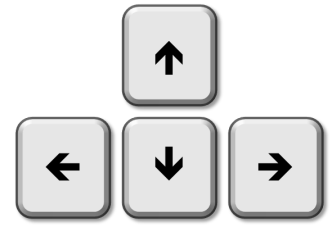 This code allows you to create an ArrowKeySequence which can be solved by a user.
An ArrowKeySequence is for example: { [⟶] [⟶] [↑] }. ( RIGHT, RIGHT, UP)
Now, when the user puhses these arrow keys in correct order, it can be seen as solved.

Examples:
1. It can be used as kind of a puzzle.
2. It can act as opening mechanism for treasure chests like in the RPG Gothic.
3. It can be a secret cheat seqeunce wich activates something hidden.

Actually I was mostly inspired by the usage for chests like in Gothic,
but I tried to make a more universal purpose out of it.

Check out the 4 demonstrations in map to see what you can do.

What makes it kind of special I think is that a user is allowed to have parallel running sequences, even of the same type.
What does this mean?

1.) Don't allow parallel sequences:
4th element was wrong and the user has to start with the very first element again.

Map Info View Resources In Use Preview Triggers Download
Reviews
23:56, 18th Jan 2016 BPower: Very cool system, which could turn out to be useful for some map makers. Puzzle can always spice up games or make you turn frustrated. I was playing the demo map for quite some time. It's cool. Check it out.
Read full review...

Very cool system, which could turn out to be useful for some map makers. Puzzle can always spice up games or make you turn frustrated.

I was playing the demo map for quite some time. It's cool. Check it out.

Tools 1 Maps 3 Spells 10 JASS 9 Tutorials 2
Looks like a neat thing, and would be cool for things like God-of-War sequences. Only one minor improvement from what I can see - the struct should all be normal methods which takes the player ID as the "this". The ArrowKey module provides you with static [] operators for taking a player and converting it to an ID, so your function wrappers can still take players but the struct would take the integer ID.

Also, the struct already namespaces you to PlayerSequence, so its public methods should just be "start" and "end".

Tools 1 Maps 3 Spells 11 Templates 1 JASS 6 Tutorials 5
oh, you're right. added them later to the struct and forgot to remove the argument they take.
I will anyway add 2 new ideas I had to have some more functionality so update will come soon.

Edit: Hold on, will update it.

Maps 1 Spells 21 JASS 6 Tutorials 1
The Link to VectorT redirects me to TimerUtils :/

Edit:
This should not get reviewed atm.

Tools 1 Maps 3 Spells 11 Templates 1 JASS 6 Tutorials 5
The update changed actually nothing but the compability to the new SequenceT version. It had to be updated.
You must log in or register to reply here.