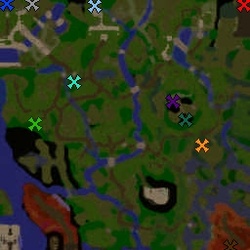 Relive the epic tale of Blizzard Entertainment's first game: WarCraft: Orcs and Humans. Stretching from the Dark Portal to Stormwind Keep, face many enemies and legendary heroes as the strive to conquer a new world or defend their homeland.

Gameplay:
Map is a 5 versus 5, automatic spawns that upgrade over time, some spawns can be manually upgraded, slightly increasing units and providing additional defenses.

Can be considered a strategy / risk game, at times becomes a castle defense (mostly when the Horde just have Stormwind left to take).

Map is protected.
Can contact creator at opgtekcor@gmail.com, or msn opgtekcor@hotmail.com.

Abilities
Teleport’s cooldown increased from 180 seconds to 240 seconds. Mana cost increased from 100 to 125.
Polymorph (Unit)’s mana cost reduced from 100 to 25. Cooldown decreased from 6 to 4 seconds.
Warrior’s Mend (Doomhammer) tool tip has been corrected, it now shows 350 hit points, not 200.
Death and Decay’s cooldown increased from 150 seconds to 180 seconds.
Resolute Heal and Accursed Mending have received a change: Old spell healed the casting target for 75/150/225/300 while healing the main target for 150/300/450/600. The new spell, retains the same healing for the main target, but creates an aura called “Resolute Aura” or “Accursed Aura” for 2/4/6/8 seconds that heals 10% of a units hit points per second in an area of effect of 300.
Avatar of Death will now summon two spirits of death per corpse.