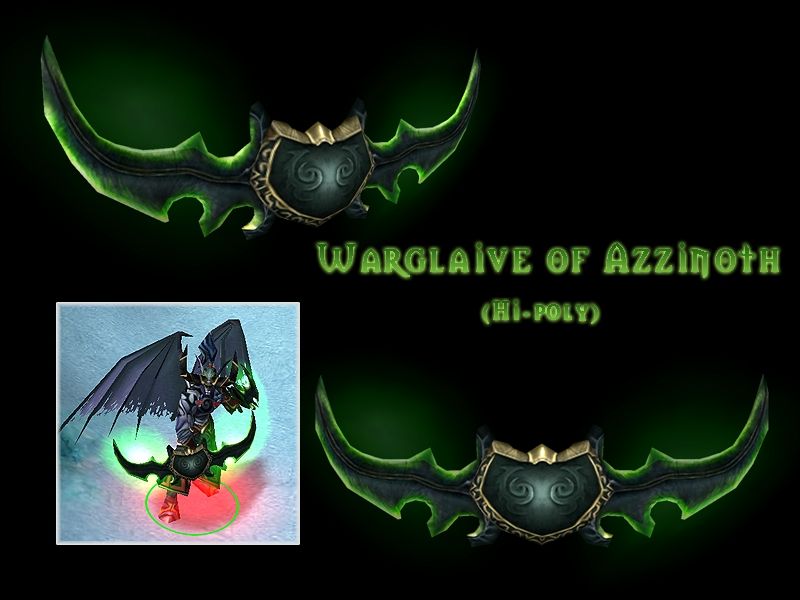 This bundle is marked as director's cut. It exceeds all expectations and excels in every regard.
View usage Statistics Legacy download
Reactions: stein123, Ryuu Yokaze, Villagerino and 16 others
"The Twin Blades of Azzinoth are a pair of weapons wielded by Illidan Stormrage. Azzinoth was a doom guard commander whom Illidan slew 10,000 years ago. Illidan took Azzinoth's twin warglaives and trained himself to use them. He has become exceedingly efficient with the weapons."

This is the high-poly version with a hi-res texture by FrIkY. This model has 574(!) triangles, so I suggest to use this model ONLY in cinematic fights or RPG's in which the camera is very close to the unit. One thing you should be aware of is NOT to use this model in masses of 20-30, since it is so hi-poly for an attachment. You'd rather have 1-2 of those on the screen at the same time.

The portrait file is the right handed version.

HUGE CREDITS TO FRIKY FOR DOING THE AWESOME TEXTURE!

A lower resolution of the texture can be downloaded here.

Here is an awesome icon modified by FrIkY for this model(click to go to the download page):

Update - 7th September 2009: Completely redid the model, reducing the polycount from 785 to 574 and making it shade correctly(aka making it brighter). I also added a small glow to the model.

If you use this model, give me AND FrIkY credits. Do NOT redistribute this model in any way. I do not want to see it make it's way to sites like "Warcraft III Unlimited".

Maps 1 Spells 2
*Dies* This is the best weapon model on the hive, I think

Models 57 Icons 21 Packs 2 Tutorials 2
Do I need to provide WIP's for the texture and perhaps let you have the .MS3D? I was hoping not to get to this level.

Can't you see the all wrong vertexes\faces?

Models 12 Icons 1 Maps 4 Templates 1
You can easily see that this isn't an WoW export. Just take a look at this picture below.

Maps 1
This is amazing. Great model

Icons 4 Skins 1
That's one sexy sword. Very high file size for an attachment, but it's worth it.

worthy a DC perhaps?
it defenitely looks better thatn WoW one... especially for a WC3 model...

Maps 1
I don't play WoW so I can't say if it's a direct copy and paste even if it was, what would the problem be? The only complain is the high file size for a attachement.

Models 4 Icons 52 Packs 2 Skins 30 Tutorials 2
Tau Empire, I can asure you that this is absolutley no WoW-export or CnP from WoW texture. Debode is a great modeler and he knows how to make models, and I made the texture, which you can clearly see here. Below you can see WoW texture of the Warglaive.

Maps 1
I didn't really care if it was or not cause the Hive makes up sorry excuse to not allow it.

Models 1 Icons 14 Maps 8
Useful for cinematics, and that really all about it :/ But you could have added animated texture to this one, that would've been cool

Models 13 Icons 10 Skins 27
are there maybe some green firey particles?

Models 5 Tutorials 1
very nice! everyone is on the mood to make legendary weapons this month.

Definitely the best weapon model on the Hive right now. The dimensions and shape are stellar, and the texture, gorgeous. FrIkY, you've outdone yourself with the texture on this baby. debode, this is one of your best ever. You and FrIkY deserve a Director's Cut for this beautiful weapon attachment. I applaud this exotic work and all the effort that was put into this model. 5/5 Highly Recommended. +Rep to both of you, as well.

Models 63 Icons 23 Packs 1 Tutorials 4
I thought I would never say this to either of you two (friky and debode), but holy shit, you've both outdone yourself. The mesh could've been a bit better (ah well, it's just me being a perfectionist about certain things), but the texture is simply gorgeous. Hands down,

Models 64 Icons 1 Packs 2 Skins 4 StarCraft II Resources 2
warglaives of Azzinoth :]
hehh.. I'll definitively use this one, as soon as it's approved :]

This is too epic for my eyes.

Models 4 Icons 52 Packs 2 Skins 30 Tutorials 2
Warglaive of Azzinoth will be updated, model will look brighter ingame and glow will be added.

HappyTauren, I am truly, truly honored. Thank you so much!

Everyone else, thanks a lot!

...Now it's even more awesome.

Maps 1
I would use this is the filesize for a weapon wasn't so big lol.

Models 57 Icons 21 Packs 2 Tutorials 2
There is a lower resolution texture available, check the descriptions(it reduces the filesize by ~130 KB)

Maps 1
Aww no redistribution allowed o well... even like I said I wouldn't use this since normal my accepting for a attachement is 100 kb max.

Tools 1 Spells 9 Tutorials 1
5/5 for sure, its really an awesome weapon model

Spells 2
Great model! It's too high-poly for an attachement, but who cares since we have 8mb BNet maps, right?

This needs to be approved. Come on, moderators! This is an awesome model/texture!

Models 1 Icons 14 Maps 8
Well considering that there is low-size texture now... it's quite good. I'd approve it if I could...

the one in wow has a star

Warhunter said:
You can easily see that this isn't an WoW export. Just take a look at this picture below.

First person ever to get the WG in Retail.. I remember that. Was awesome seeing her in shatt

Icons 127 Packs 1 Skins 2 Spells 13
Its size is a bit odd(for an attachment), but shouldn't really matter for such epic weapon

Models 64 Icons 1 Packs 2 Skins 4 StarCraft II Resources 2
do you guys plan to put a glow on it? Ouo

Models 57 Icons 21 Packs 2 Tutorials 2
Misha, there already is a glow

debode said:
Misha, there already is a glow
Click to expand...

I think so, this models texture is just awesome.

Dorken said:
I think so, this models texture is just awesome.
Click to expand...

5/5. Out of curiosity what other WoW items will you be making models for just the legendary ones or others?

This is just...awesome! Woah, my bro is really good at skinning and so are you in making models.
You must log in or register to reply here.