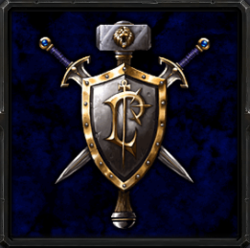 UPDATE: fixed a few things (still don't know how to fix the caravan thing unfortunatly... there where no broken triggers relating to the caravan so...)​
The Reign of Chaos Human Campaign using the tech of a map i am developing, Warcraft: Evolved.

I am uploading this to hive because the others in the Azothan discord told me to and, in all honesty, i need to put at least something of this map out there. I will put up the actual map it'sself eventually... but in the words of Alexandros Mograine(i think), "That day is not today".
(note: i also have the RoC Undead and RoC Orc ones done, but will not be putting those up just yet...)

Known issues: the Undead Caravan in The Defence of Hearthglen does not appear until after it has apparently taken over the final town...
(if anyone finds something, please either message me or say it in the comments)

Daffa
Had a quick run, and I can barely discern new contents in the first few levels. The new axeman guy uses icon same as a footman, and archer uses the female icon? excuse me? Apart from that, there's zero difference I can spot at the first level. Can't...
Read full review...
Reputation Statistics
Page 1 of 2
Show Ignored Content
Page 1 of 2