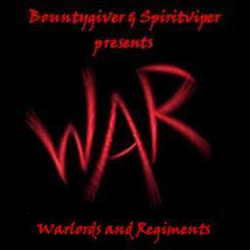 Warlords and Regiments is a 12-Player AoS (Aeon of Strife) type Warcraft 3 Frozen Throne Expansion map. Created by Bountygiver and Spritviper by 29.02.2008, it is basically a 4-team hero vs hero map, with 3 players per team, which the victory condition is to destroy all 3 of your opponents.

-Changelog(v0.18)
-CRITICAL: Removed more elements prone to server splits from the Initialization trigger.
-CRITICAL: Fixed the "infamous" hero-aiming bug which causes Alliance creeps to focus their attacks on player heroes only.
-CRITICAL: Fixed a bug with certain tooltips not showing up in game.
-MAJOR CHANGE: Added "-random" command to enable players to choose a random hero with no cost. A random hero is also automatically selected if a player doesn't choose a hero before the creeps spawn.
-MAJOR CHANGE: Added "-stack" mode to enable multiple selections on any hero.
-Removed some extra and unnecessary lines of code in order to improve performance and reduce map size.
-User control is now disabled during highly performance demanding moments, eg. Loading heroes.


Credits:
Thanks to Katanna to the LocalHandleVars script
Thanks to Anachorn, CRAZYRUSSIAN, Mc !, Blizzard Entertainment, Infinitynexus, Illidan_09, Gwen_Stefani, General Frank, LoDown, 13LUR, OgeRfaCes, WILLTHEALMIGHTY, Deathclaw24, KelThuzad etc. etc. for all the custom icons and models.
Thanks for Blizzard Entertainment for everything

Thanks to all for playing this map

Moderator
18:07, 25th Mar 2009 by bounty hunter2: An interesting four side AoS map. It is quite big, almost 4Mb and that's its biggest problem since it's multi player. Another problem is lag, which there is some, but my computer is kinda very slow and old thus...
Read full review...
Reputation Statistics
Page 1 of 2
Show Ignored Content
Page 1 of 2