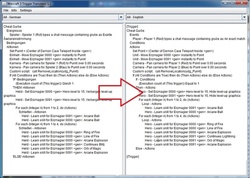 Trigger Translator is an in Java 8 written software allowing one to translate the keywords of an GUI Trigger, one copied with the world Editor feature "copie as text" and allows to add BB Tags:" Trigger, Hidden, Spoiler, Jass".
Overall this programm should make it alot easier for people, who not using the english version of warcraft 3, to post GUI Triggers.

Keywords are defined in Language files which can be created with an included subprogram called "Language Creator" based on Rulesets. This requiers your local WorldEditStrings.txt file which you can extract with an mpq editor for example Ladik's MPQ Editor 32bit.

Rulesets define which part of the WorldEditStrings is taken.​
On it own included Languages: English (simple/all), German(simple/all).
Contents
Reviews

eejin
Works properly for at least English <-> German conversions. The English -> Korean translation did show some missing glyphs in the font, but that might just be my installed front. Approved!
Read full review...
Reputation Statistics
Show Ignored Content