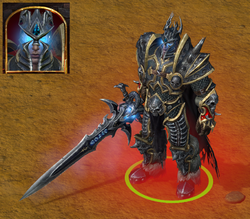 In this upload, I am uploading The Lich King Again.

Other people already made their own of The Lich King, but I didn't know that and didn't pay attention to resource section and made this a few months ago. If my memory serves correctly, this model was not made from the other identical looking models on Hive, but is instead the same process applied again:

Then I added some eyeball glow that is the same style emitter as what we find on his sword. That's different from some other The Lich Kings that other people made where the eye glow is some unique effect, or the sword has WoW blue fire on it, or whatever -- I didn't do those other things.

I am uploading this because the model does exist, and it helps us explore the question of whether the model section should have five or ten identical models created by totally separate authors or whether they should be taken down. Are we archiving what exists, including my personal The Lich King implementation, or are we making a system where one Lich King To Rule Them All gets uploaded and the rest are hidden or voided out of existence?

I don't know the answer, but by uploading my personal The Lich King Again, which I made on accident without really figuring out that other The Lich King(s) were around, I can create discussion about the problem and also this doubles as a way for anybody who wanted my personal Lich King in their map.

Some of these other ones look better, though (in particular the sword on mine flies out of his hand on one or two attack frames):