The Kirin Tor and Jaina Proudmoore after WotLK.

The Kirin Tor ready for action. 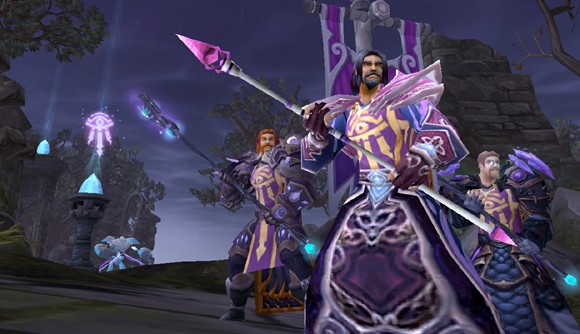 Seeing as a lot of talks include the Kirin Tor and Dalaran theses days, I've decided to open up this topic.
So what do you think of Dalaran/Kirin Tor during Cataclysm, MoP and now? Any second thoughts about it?
Anything better that Jaina may have done or just praises? Feel free to debate on this topic.

P.S you can include the High Elves too if you like since they're with Dalaran mostly now.
Last edited: Aug 31, 2014

Maps 2
Will Dalaran turn into Alliance city? If so i need to gather people and raid that place . I want Kirin Tor expansion, because i want to loot Jainas corpse already.

They may be neutral, but many of their warriors and mages died in wars. They are leaning more towards the Alliance, but I think the peace is their priority. Well, at least it was... until someone showed up xD

CakeMaster said:
They are the 'Garrosh' of the Alliance.
Click to expand...

That's a bit too far fetched you know Cakey

Yeah, they're not that bad xD

After the Purge of Dalaran, Jaina made sure that DALARAN has rejoined the Alliance. Just saying...

Maps 8 Templates 1
Indeed she has so I suppose its Alliance faction now. End of story folks!

CakeMaster said:
But they are leaning toward neutral with their user friendly attitude. On Garrosh's part, against-the-world attitude.
Click to expand...

Kirin Tor are either totally neutral or just lawful neutral, but Garrosh is chaotic evil.

Models 3 Icons 65 Packs 3 Skins 27 Templates 3
I think you need to buy some glasses, read what I wrote in the first post - lol

So what do you think of Dalaran/Kirin Tor during Cataclysm, MoP and now? Any second thoughts about it?
Click to expand...

So what do you think of Dalaran/Kirin Tor during Cataclysm, MoP and now?
Click to expand...

If it's about now, then why include the Cataclysm and pre Tides of War?

I hate how she allows the Horde to kill her father, who wanted to destroy the Horde, and then in MoP she's hunting them herself. But, again she had a reason for it.

Models 196 Icons 24 Maps 7 Spells 7 Reforged HD Icons 1 User Interface 1 Tutorials 2
Blizzard put the Horde in a pathetic state. Then they will add members of the Iron Horde to re-balance it.

I think the Iron Horde will be their enemy, too.

Anything is possible
As for the Kirin Tor, I think they'll leave their mark on the events of WoD, aswell. Although, they rarly ever have a huge role. They usually work from "shadows". But, that can also be changed with Jaina's arrival.

Models 196 Icons 24 Maps 7 Spells 7 Reforged HD Icons 1 User Interface 1 Tutorials 2
They don't even work at all, from what I see. They just pretend to be full-time and busy and all.

Maps 2
Garrosh wont be defeated second time, becuause he will die in a duel with Thrall.

Maps 3 Tutorials 1
One day Kirin Tor will figure out that they have flying City that can go anywhere and land anywhere. Just drop it on Orgrimmar and the end. Or make flying mountain if you don't want to risk city itself.

Of course that would mean actually breaking status quo and we can't do that. Or worse it would be victory for Alliance.

VeljkoM said:
One day Kirin Tor will figure out that they have flying City that can go anywhere and land anywhere. Just drop it on Orgrimmar and the end. Or make flying mountain if you don't want to risk city itself.

Of course that would mean actually breaking status quo and we can't do that. Or worse it would be victory for Alliance.
Click to expand...

Well, the original plan for the Siege of Orgrimmar raid was to have Dalaran flying above the city, but Blizz ran out of time or something.

Skins 1 Maps 4 Templates 1
Ooh nice, send Dalaran to Draenor, why not?!
Speaking of that, the Kirin Tor will have a roll to play in WoD?


WoWpedia on the Stormwind page said:
The Kirin Tor have built a camp on a plateau behind the city walls, overlooking Mage Quarter. A portal is situated there, which is a gateway between the camp and the Everbloom outpost. After losing control of the situation there, the portal allowed Gorgrond overgrowth to leak through it, while the Primals led by Yalnu invaded the city.
Click to expand...

WoWpedia on the Kirin Tor page said:
The Kirin Tor's expedition into the alternate Draenor of thirty-five[12] years ago is led by Khadgar. Based at Zangarra in Talador, the Kirin Tor appears friendly to Alliance players and neutral to Horde players. Despite orders from Jaina that Horde is not allowed on Kirin Tor grounds, Khadgar states that as a member of the Council his friends are allowed in and if Jaina has a problem she can take it up with him.

The Kirin Tor were also responsible for maintaining a supply line between Draenor and Azeroth, but their holdout within The Everbloom was overgrown by Primals and most of its population infested by the Fara. This turn of events nearly ended in a disaster, when the genesaur named Yalnu crossed the mage portal into the Kirin Tor overlook above Stormwind, where he was stopped before he could muster his strength and infest the city or even worse.
Click to expand...