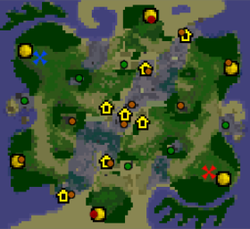 I felt like submitting any old map would be boring so I've designed something new, but then lacked the time to balance it. You know how sometimes maps just feel natural and generally have a nice flow? Well this isn't one of them. No matter what I do, it stays bumpy and weird.

Anyway, the main idea was to combine the Sunken Ruins tileset with the Ashenvale tileset, and that worked out pretty well. I hate Warcraft palm trees anyway and Ashenvale trees are almost even cooler than Lordaeron summer trees. Also, the various types of thick grass in combination look very pleasing. Shells in a forest are pretty. And the creeps are a mix of water and forest types.

The layout plan was to have four "paths" connecting the left and right side of the map. However, due to the upper and lower paths being very far out and having no interesting creep camps on their way (until the late game at least), players tend to always walk through the two center paths, effectively reducing the size of the playing field. Feels like everybody always knows where the enemy is located.

For the center, I've recycled the double-access shop concept of Royal Gardens, but it doesn't make any sense in this case, it's just there. It sure draws attention but there's simply no point to it. The creeps are the same on both sides and I had to pick "dumb" non-caster creeps because casters would interfere with the other side in test games.

The map name could be better, too. Anything with "beak" perhaps? I'm open to suggestions.

I feel that the map could be too narrow in too many areas.

The lvl 18 Mucloc camps that guard the lvl 4 item drops are probably too weak. On a side note, the item drop is either lvl 4 charged or lvl 4 permanent on both sides, because I couldn't decide for one. Odds are 50:50.