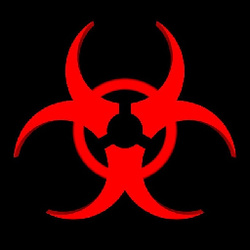 What is this?
A hero defense / survival map where creautres love to show their crazy abilities..
What is different in this map?
Survivors are unique in their roles (abilities, weapons) as well as advanced creatures do more than just some simple melee attacks. Ammo is also limited; so you don’t just wait behind a barricade, shooting, until you or your enemies die. Gameplay is believed to be more dynamic than that.
What can enemies do?
While classic zombies do nothing other than basic mele attacks; Ghouls can paralyze, Forgotten Ones can walk, climb over walls and obstacles; bats can fly (as usual), Stalkers can charge to survivors; Glowing Ones can blast survivors, knocking them away; Abominations can cause diseases, Fiends can ensnare Survivors, rendering them unable to move; and mighty Dreadlords can bind and drag survivors to themselves.
What can YOU do?
You can pick one of the 4 unique heroes, work cooperatively with your team mates, live or die together. Engineer can craft items for example. He can build turrets, some wise traps that will confuse the enemy; or create ammo from raw materiels. Heavy Impact Specialist can Artilery Strike at long range as well as being able to Slam ground; dealing with enemies by knocking them back. While Marine can improve his battle capabilities to extraordinary levels, controlling X22-K Prototype will be a totally different experience. (Duh, sounds like some lame product advertisement)
Inspirations
Afterlife (Ammunition and Reload System Idea)
Resident Evil Tribute (City Geometry)
Fallout Universe (Concept, names etc..)
Credits
- Marine, minigun, assault rifle and their effect models are by Talon the Mage,
- External weapon sounds are taken (and modified) from www.fpsbanana.com database but I haven't been able to keep track of exact owners of the sound files, regretfully..
- Loading screen image is downloaded from: twistedmatrix.com/users/glyph/povray/images.html
- Wood, Iron and Steel models by Ergius,
- Cotton (bag) model by !!GORO!!,
- Iron and Steel icons are downloaded from: www.wc3sear.ch
- Ammo Box model by Thrikodius,
- Sensor Module and Assault Rifle icons by Zombie,
- Medkit icon by JonNny,
- Water Flask model, Engineer and HW Guy icons by General Frank,
- Marine icon by Ampharos_222,
- Turret model and icon by olofmoleman,
- Heavy Turret model by Kofi_Banan,
- Battery, Engine, Psycho, Enginnering and Electron Rifle icons by The_Silent,
- Stimpak icons by Hybred,
- Play and Pause icons by Mobilize,
- Prototype model and icon by GhostThruster,
- Minigun icon by ikillforeyou,
- 7.62mm icon by Thorneon,
- Scope icon by AlienArsonist,
- Explosion and Rad Explosion effects by WILL THE ALMIGHTY,
- Barracks and Refinery models by Mechanical Man,
- Steel Factory model by shamanyouranus,
- Power Generator, Iron Mine and Garrison models by Mr.Bob,
- Thanks to Pharaoh_ for being a lifesaver =)
- Thanks to AyeKantSpel for name suggestion of "High Impact Specialist" and helping me create new ideas =)

Changelog:
- Fixed some location leaks (thanks to Mumbis),
- Removed some unused data from map (reduced file size by 200kbs),
- Modified Cloak; it is now a target ability with modified stats,
- Fixed the issue with Med-X speed bonus duration,
- Changed hp of barricade and the production interval.
(This also gives a balance to barricade repairing)

Known Bugs:
- Random buff icons with "Tooltip missing" text appear on units.
(This normally happen when there are empty buff strings in the map. Don't know why it occurs in this case..)
- Basic Crafting and Sprint has the same Order ID (berserk) which causes conflict between them.
- Sometimes at the end (Level 75) some of the creeps get stuck and game doesn't end properly. Developer commands can be used at the point if such sitiation arises. Or players can explore the surrounding area and kill remaninig creeps.