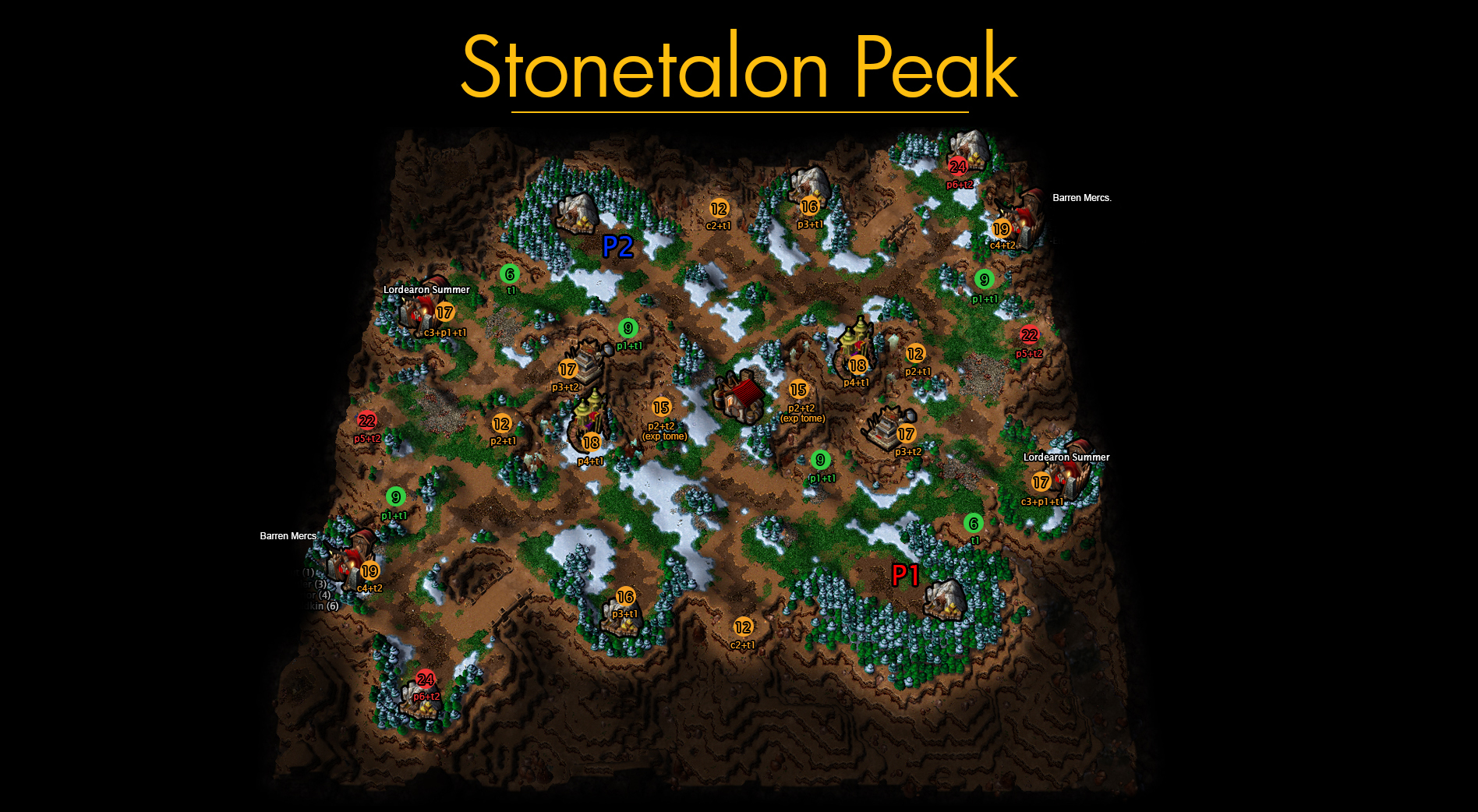 Description:
Stonetalon is a mountain region and ancestral home to the harpies. Few people dare make the climb to the peak during winter season. However a few experienced sherpas yet make the climb in order to hunt.

Dev. Comment:
I got an idea for a mountain map with really tall cliffs. I wanted to see if i could mix barrens and snow, a cool contrast. The layout is a basic 3-lane setup. With 3 rows of goldmines. There are 4 mercenary camps in total, something unique to this map. So you can pump food count into your army after a lost fight. One sells lordearon summer mercs and the other sells units not seen before in ladder (custom merc camp):
-Harpy Scout, used for scouting. As there is no ward drop on this map.
-Tuskarr Healer, early dispel and heal is always useful and can help UD make other builds.
-Tuskarr Warrior, medium melee unit.
-Enraged Wildkin, heavy melee unit. Available 12 minutes into the game.
It's not considered a melee map by standards because i had to edit cliff height vision for bridge and manually adjust colors on the minimap so that the edges of the map are blacked out. There's no workaround for this because the standard is so strict.

-Adjusted ramps near the sidelane to make the path shorter.
-Removed 1 cliff level from sidelane. Lab and Mercs are still on the low ground.
-Added hotkeys for custom merc camp and fixed missing tooltip for Enraged Wildkin.

mafe
Ooops did I actually mark this map as a contest entry? Anyway, removing the tag now. As stated in the description, due to minor change this is not "technically" a melee map; however given tha changes are minor, it clearly is a melee map for practical...
Read full review...

Maps 10 Tutorials 1
Ooops did I actually mark this map as a contest entry? Anyway, removing the tag now.

As stated in the description, due to minor change this is not "technically" a melee map; however given tha changes are minor, it clearly is a melee map for practical purposes. Obviously, I dont have to explain any basics to you, and the map will be approved.

So just a some notes/questions:
-There are many trees where wisps are safe from melee units, in a competitive setting this might be a problem.
-I like the style of the map, even though I have different memories from stonetalon in wc3/wow (classic).
-Also fun idea with the merc camps. I cant claim that I have a clear idea how the unusual mercs will work out though.
-I'm a fan of powerups and I would add some to the red gold mine spots at least.
-At the spots next to the taverns, the wendigo in the east drops a powerup while the one in the west doesnt.
-One creep at each labd has a 100% chance to drop nothing, is this an easter egg or an oversight?
-There's a lot of creeps for a 1v1 map, but why not?
-Good use of bridges.
-The trees/unbuildable terrain seem to make AoW-Creeping the 4-2-2 tuskarrs marginally more difficult in the south compared to the north.
You must log in or register to reply here.