Skins 3 Maps 12
I wanted to upload this as a pack ('Packs') but that doesn't seem to allow zips/rars so I will just post it here (external link, cause of 50 mb zip limit on this site):

This is a new take on the traditional Starcraft races. The three races have been replaced by three hybrid races with completely new units and buildings. Includes AI variations to make playing against computer more interesting. Includes sounds/voices from Starcraft 1, except for the music but you can easily find the playlists of Starcraft 1 music on youtube (for the full experience ;D).

Important! Only choose between Human (/Bionic), Orc (/Infested) or Undead (/Void Predators) for both you and AI players. AI does not function as it should when it has its race as Night Elf (Warcraft 3 bug).

There are three playable races:
The Bionics - a combination of Terran and Protoss forces
The Infested - a merge between zergs and infested Terrans
The Void Predators - a merg between Zerg and Protoss

Features:
- Play with one of the three Hybrids races. Each race featuring an arsenal of new and unique units and structures.
- The focus is more on strategy than micro managment, like in Starcraft 1. Many abilities can be auto-cast or are passives, allowing you to focus on other important things. Also terrain bonuses. However there are still some units for you who like lots of micro management.
- The all new units and buildings enable entirely new defensive and offensive strategies.
- Many custom resources and Starcraft 1 sounds (even voices) have been used to give it that starcraft feeling, while staying under 8mb! So you can still play the map on battlenet and lan. 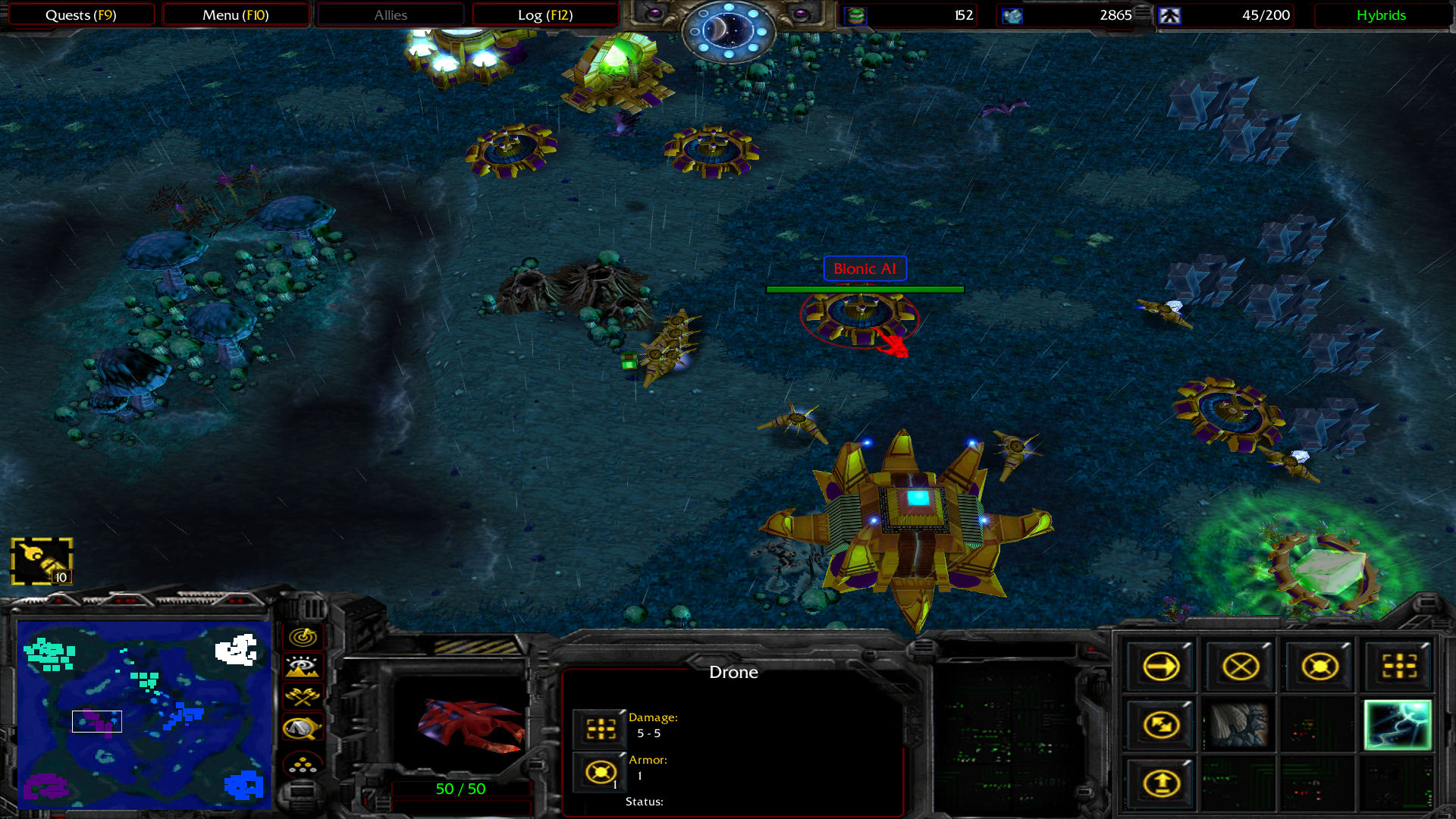 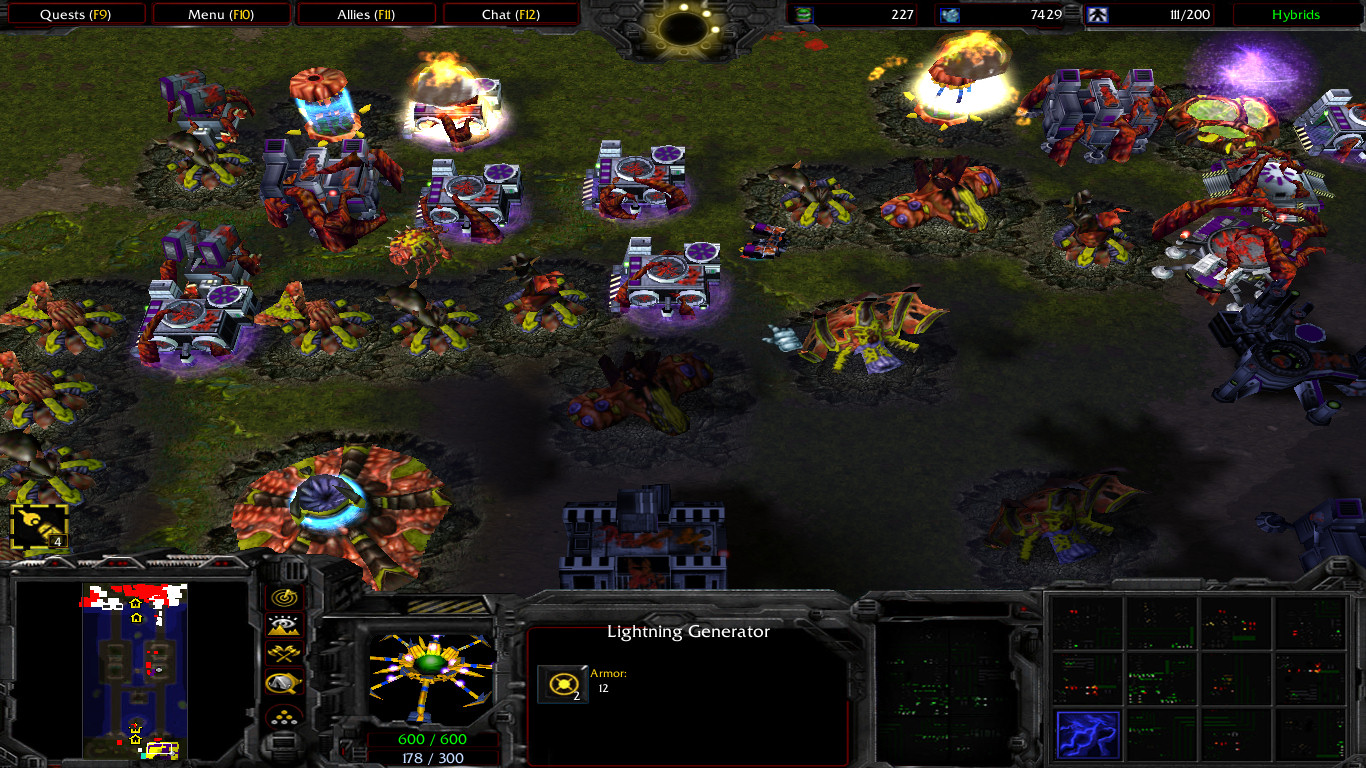 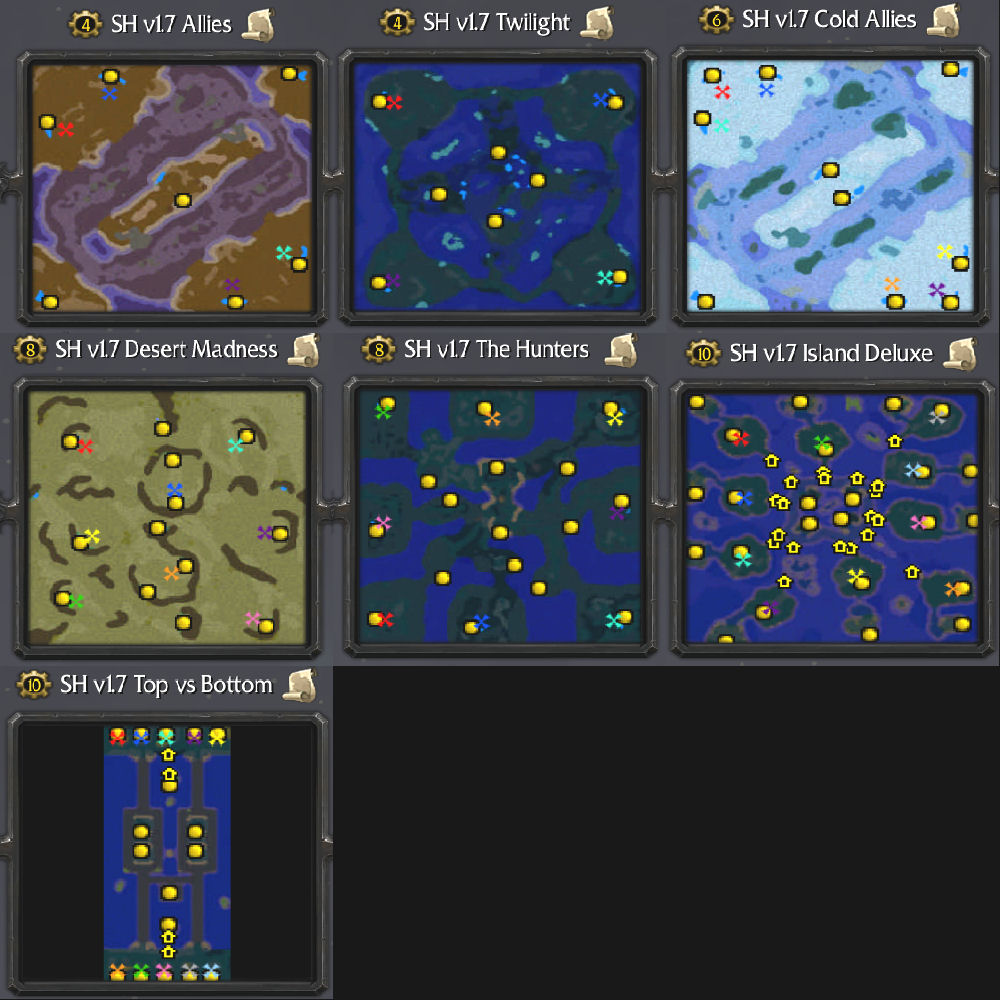 How to install:
unzip the zip file (through e.g. 7zip or winrar) somewhere in your Warcraft 3 maps folder, example:
C:\Warcraft 3\Maps\Scenario

!READ!
Don't forget, don't select Night Elves or random as race, cause of some warcraft bug it gives issues. So choose between Human (/Bionics), Orc


These maps are not protected, you can modify, take things from it and hopefully learn from it. Do as you like.

This update removes alot of lag, balances the Void Predator race alot, adds 3 maps, improves insane AI and some other things:
* Way less lag.
* Insane AI is insane AI now; they are much harder than before.
* Fixed an issue that AI player 9 and 10 didn't use Bunkers.
* Added a dirt/fall defensive map; Allies (4) and a more offensive snow/ice variant; Cold allies (6).
* Added a desert/sand map; Desert Madness (8).
* Strategic points give +6 to armor instead of +4.
* Fusion Cannon +50 attack range.
* Shield Link System has an increased effect, now 50% instead of 33%.
* Aurochs (Bionic anti-air dropship) Vespene cost reduced from 60 to 50.
* Broodling cost reduced from 20 to 10. They still cost 1 food though, but Infest Bionic Building is now more usefull.
* Minion more health from 150 to 175. Minion splitted health from 75 to 100.
* Voidwalker's abilities costs now less mana, making Void Predators better at healing and anti-air.
* Darkling anti-air ability (Dark Stream) damage increased from 6 to 9 per 0,8 sec.
* Darkling Enery Mass is increased in damage (+25%).
* Minion Horror slightly bigger effect (from 25% to 30%).
* Mind Control increased range from 100 to 250.
* Mephit Swarm Nest hp increased from 140 to 180 and mana cost decreased from 100 to 90.
* Energy Cannon mineral cost decreased from 175 to 150.

* 3 new defensive/support buildings (1 for each race).
* The build time of Drones has been reduced from 9 to 7 to compensate for the worker lost when creating a building.
* Sunken- and Void Colonies now give supply too like non-upgraded Colonies.
* Shocker has a new ability: Blaster.
* Minions now have the Horror passive ability which decreases the combat effectiveness of nearby enemy ranged units.
* Top vs Bottom: the two expasion islands that are close to the starting locations of the players have been made a bit wider, so more room for

structures.
* Top vs Bottom: center island (which a bit to the south) made a bit wider so it is easier to capture.
* Island Deluxe: improved terrain detail.
* The Hunters: fixed the victory conditions and defeat messages bug.

* Hotfix Top vs Bottom (8 september): added Xel'naga Tower to Top vs Bottom, 'resources at the player start locations are removed for players that are

not playing' is now properly working.
* Hotfix for Island Deluxe and Top vs Bottom (2 september): fixed the victory conditions and defeat messages

* New island map for SH. More maps will come.
* Improved AI, more expanding and with a better economy. The AI variation that focusses on 'air' has been remade.
* Added terrain bonuses system.
* Option for player 1 to choose between easy, normal and insane AI.
* Option for player 1 to disable superweapons.
* New siege unit for Void Predators added: the Shocker.
* Some terrain improvements.
* Fixed Templar of the Void's and Spectral Archon's food cost (they were very high for some reason).
* Drones are now trained faster (from 12 to 9) compared to other workers to compensate for the Drone lost when creating a building.
* Void Predators buildings' mineral cost reduced to compensate for the Drone lost when creating a building.
* Rebuild improved alot, from 75 hp restore to 200 hp restore.
* Reaper faster movement (+30), weaker Sythe attack ability (from 40% to 30%).
* Broodlings have gained the Reflecting Carapace ability, rendering them immune to all effects.
* Void Walker now has Weaker Gravity Pull instead of the Templar of the Void (the Templar could not auto-cast it properly cause it is invisble).
* Dreadnought's area damage reduced.
* Increased the range of Dark Stream so it matches the range of the Darkling.
* Into the Void has a longer duration and improved effect.
* Voidwalk has a longer duration (from 20 to 30 seconds).
* Swarm Nest (from Mephit) damage increased from 4 to 6.
* Call Forces area of effect reduced from 250 to 200.
* Killing a neutral unit (e.g. an unit that is effected by the Chaos spell) won't give bounty anymore.
* Void Accumulator now has a proper birth animation.
* Enfeeblement Aura buff graphics changed, less noisy.
* Grim Ward less noisy.
* Buff for Nanobots fixed.

* Added a whole new hybrid race (Dark Force) with new AI (next update will give new AI to Bionic and Infested too)
* Superweapons! (AI builds and uses it too)
* The Bionic and Infested gained lots of new abilities and upgrades + longer tech tree
* Fatal error bug fixed
* Redone hotkey system, based off position icon on inteface now.
* Many abilities now cost mana instead of only having a cooldown (the cooldown is lowered though to let the abilities stay usefull).
* New worker abilities and upgrades, also different for each race now.
* Improved AI vs enemy towers
* Fixed bug that Abomination Fear ability also effects buildings.
* Fixed defeat messages about Neutral Victim.
* Fixed some repair times of various structures. Towers can be repaired a little faster.
* Fixed repair costs of Infested Worker and SCR (Bionic worker) so no more high gas costs for repairing them.
* Hellflurry Mech's have 30 hit points less and their second attacks only attacks air units now
* AI Dreadnought Hangar Bay ability has been nerved to compensate for full control for AI over Interceptors.
* Dreadnought's attack range reduced from 740 to 670
* Bacterian health increased from 35 to 50, stronger against Dreadnoughts
* Spore Turret has an improved Spores ability that also reduces the target's attack speed
* Aurochs now have 4 tranport slots instead of 3
* Broodmothers now have 8 tranport slots instead of 6
* Broodmother population cost decreased from 4 to 3
* Tier 2 ground-troop production buildings (Bionic Core, Plagued Enlargement and Cavern of Void) build time increased from 60 to 75.

* New Starcraft 1 terrain tiles (by Stryderzero)
* Gas is mined faster, from +3 to +4
* Mineral mining is changed a bit, mining goes slower but workers can carry a bit more.
* Removed 1 mineral from starting positions. It is now more important to expand for minerals.
* Upgrade length is reduced by 33% except for general damage and armor upgrades
* Radiating Core (from Nucleair Pylon) damage reduced from 10 to 6
* Flesh Bomb shorter duration (from 30 to 20 seconds)
* Fixed Infested armor upgrade used for Infested Worker
* Fixed repair times for mechanical units
* Phantom's invisibility ability improved alot but damage reduced a bit
* Dreadnoughts (Bionic huge ship) aoe damage is reduced (from 70/40 to 35/20) and attack range is decreased a little bit
* Spitters (Infested long-range flyers) attack speed decreased, from 1.00 cooldown to 1.25
* The upgrades Electronic Pulse Attack and Salvage (for workers) are cheaper and length is reduced by ~40%.
* New armor icon

Special thanks to GhostThruster for portrait edits and loading screen.
And to Hiveworkshop members that gave me feedback!

wcity said:
do you make sc2 of this?
Click to expand...

, more like a starcraft spin-off. In starcraft we sometimes the races work together (like Terran+Protoss to kill the overmind) and we see the infested terran (I think even infested protoss at some points), which I think was interesting and wondered what if the races would share technology (= Bionics) and the zerg would be more successful infesting terran (= Infested) and zerg infesting/merging protoss (= Void Predators). Hence the Hybrids name. So its not about the 'evil' hybrids seen in the Sc2 campaign. In short; it basically creates 3 new hybrid races set in the starcraft universe to replace the 3 traditional races.

Models 2 Packs 1 Maps 13
Great one i like your maps very much. Are the triggers of victory defeat fix for bionics when pylon dies they lose

Sunreaver said:
Great one i like your maps very much. Are the triggers of victory defeat fix for bionics when pylon dies they lose
Click to expand...

, thanks! As for if pylon bug, I think yes that it is fixed, cause I use different victory/defeat conditions from someone that altered the melee (default) ones compared to the buggy triggers I used in version 1.4 and lower. So far for me it works, but if someone does encounter a problem/bug with them please share it so I can take a look at it.

Models 2 Packs 1 Maps 13
Thanks the gameplay is so good. Will u made this mod for Starcraft 2 ?

Models 1 Icons 2 Packs 1 Tools 1 Maps 15 Spells 29 Tutorials 4
I recommend asking Retera for a MPQ compiler, this way users can enjoy your mod on ALL Melee maps ^^

Daffa the Mage said:
I recommend asking Retera for a MPQ compiler, this way users can enjoy your mod on ALL Melee maps ^^
Click to expand...

, that's a great idea! I will ask him/her about it.
You must log in or register to reply here.

[Altered Melee] Looking for some Feedback