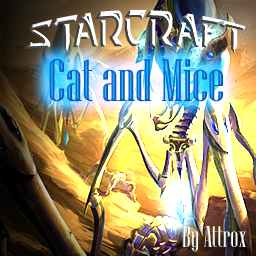 This bundle is marked as useful / simple. Simplicity is bliss, low effort and/or may contain minor bugs.
View usage Statistics
This is the recent 1.4b version of Cat and Mice.

After my old version non being approved due to "Map Stealing", i changed alot, few triggers, some models, new ingame-hints, new revive-system and the names of the Starcraft-Mappers, who had the original idea of making "Cat and Mice";
All bugs are fixed and the map should work perfectly.

Gameplay:
There are two parties: The "Cats"; (2 players) and the "Mice"; (5 players).
The cats are very strong and can kill the Mice with one attack, so the smaller Mice have to hide, build a litte base and to buy units like zerglings, hydralisks, zealots and tanks to kill the Cats.
But the Cats also get money for killed Mice and buildings, and they can buy evil helpers like "Mischamiks", a kind of tower, spy-birds or infested mice, who can also get through little holes that are to big for normal cats.


My guide "Cat and Mice Jungle 7.0", a Starcraft map made by
"Robi[UTRJB" and "Xtremly-Bored", that had been upgraded by "InToTheTuRReT"

For WC3 i hab to do the triggers, units landscape and everything else myself. Only the VERY GOOD idea of this kind of map, which i loved in Starcraft BW, is not by me.

I hope you will enjoy this map, as strong and cruel Cats or as little but smart Mice.
Good Luck and Have Fun with this!

EDIT: I name the names of the Starcraft-Mappers in the Loading-Sreen and during the match, so don't think again i "stole" this map ;-)
You saw (Monks VS Devils) that i am able to trigger a tag map!

1.3c --> 1.4a:
-small terrain changes
-High-Mice bug fixed as good as possible (Mice wo't be able to get on the top of the boxe's walls by triggers).
-New minimap

1.4a --> 1.4b:
-"Infested Terran" as a new powerful unit for cats, in two variations (1 for 30€ gold or 3 for 60 gold)
-Zergling HP from 500 to 550
-Civilist HP from 700 to 900
-Infested Mouse doesn't have the ability "Parasite" anymore because it was too stong and didn't work like the Starcraft-ability "Parasite".
-Between buying a Mischamick and posessing a Mischamick, there are two more seconds for avoiding "last minute reviving-mice kill". If cats want to kill mice which are reviving other mices, they have to build the tower much faster now, what makes the move more difficult.
-Zealot does not sound like a woman anymore

Map Info View Resources In Use Preview Triggers
Reviews
20:15, 16th Mar 2009 by bounty hunter2: First of all don't vote your own map for approval. Secondly, this map isn't quite original, just a tag map, reminding me of the sheep tag game, however with less buildings to chose from. Rejected.
Read full review...

20:15, 16th Mar 2009 by bounty hunter2:
First of all don't vote your own map for approval. Secondly, this map isn't quite original, just a tag map, reminding me of the sheep tag game, however with less buildings to chose from. Rejected.

Maps 1
If I were Moderator, I would approve this
It's simple and good! [Well 4/5]

Maps 1
I wish I had someone to battle.netzor with...(HINT HINT)

I would like to point out a way to cheat in this for the mice.
If you build a building right ON the bottom right corner of a cliff, the mouse will end up on top of it. I don't know if this was fixed in the 'terrain changes' but I'm sure it might not be.
The cats have no way to reach the mice up there unless a ranged cat would be added or the cliffs fixed.

Maps 4
Heh, Don't feel too bad about being accused for "map stealing". I was accused that my map "did not work" on bnet even though that very same day, I hosted it plenty of times.

Maps 3
Not bad but you could make more different buildings and units to buy.

Main cheese should be free. Now if cats kill your main cheese and you don't have any money, you can't build buildings or buy units anymore.

You could make buildings where you can train units.

Also terrain could be better but as I said before not bad map. keep going

Skins 2 Maps 10 Spells 1 Tutorials 1
last time i checked its not map stealing unless you download someone elses map and submit it on hive. its not stealing to take a game from starcraft and remake it in warcraft.
You must log in or register to reply here.

A
Starcraft Cat and Mice