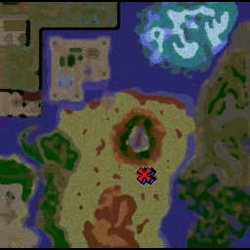 A new roleplaying map created by long-time roleplayers. Originally SRP was a modified version of TheBlackMage/Motive’s uncompleted prophecy roleplay map, designed for a specific rp storyline with permission from the original creators. However, we put so much work into it that we decided to make it more applicable for general rping and have released it openly. Hope you enjoy it!

Special thanks go to all the people who’ve made models, icons, and skins that we’ve used in the map. Credits are in the quests menu; if we’ve used something that you made and have missed you please let us know and we’ll make sure you’re mentioned in the next version.

Check out our forums at srp.cjb.net for more information on the map and to report bugs and suggestions.

SRP:
Idyllwyld: Just about anything that needed work, mostly units and minor terrain edits. Jerk-err Jack of all Trades. Also came up with the original Saga concept, so this is all really his fault.
Pheonix-IV: Terrain, based off of CotM with modifications to fit Saga storyline.
King Darkmoor: Custom units, triggers, and some terrain tweaks

-Fixed several crashing bugs/exploits
-Loops are maintained when giving units to neutral
-Selection bug has been reduced
-Adding and removing abilities via ability codes has been changed. Rather than '[Ability Code] and @[Ability Code] it is now #[Ability Code] and $[Ability Code]. Adding and removing via ability names remains unchanged.
-Pretty new felchaim model. Isn't it shiny?
-Shop area has been compressed, creating room for a new interior below it. This new interior is currently empty; if you have any suggestions on whether to leave it this way or make it into someone feel free to post them on our forums.

Note that we've had several internal tests prior to this release, which is why its jumping from 1.19 to 1.23.

Moderator
08:51, 29th Jun 2009, by Rui: I sincerely hope the creators fix the command bug. The import manager needs a cleanup, as does the quest log. Here's my full review. Approved with a 2/5 (Lacking) rating.
Read full review...
Reputation Statistics
Page 1 of 2
Show Ignored Content
Page 1 of 2