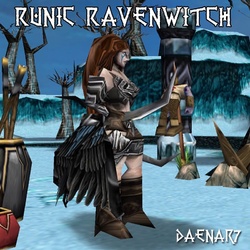 Updates:
I tried to reduce the strange texture stretching on her feathered cape by darkening some strategical spots. So the result is something like a black mantle with only some areas covered by feathers.

The idea for this was a metamorph unit (like the druids of the claw/talon) which will morph into a more wild version of herself. In this case i will use the model of an harpy and, if i make it, i will upload the skin tomorrow.
I did so because of the lack of flying unit. Basically when she is in her normal form, she's a sort of stealth killer and may transform into a flying and more dark unit with great mobility.

I know, my dear silly critic kids, there are some major issues with the model i couldn't do a thing about :3

-The hair mesh is totally stretched and works fine in the default model because it's basically black.
-Also some polygons of the forehead are stretched, so i had to compromise things.
-The feather mantle has some problem in some spots, but i think it's not even noticeable from the in-game point of view.

In spite of everything, and aware of these limits, i wanted to do this unit so badly, so GG.

---
Give credit if you use this skin, thanks!