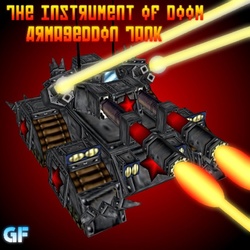 The super heavy Armageddon tank pack two heavy 155mm cannons, a dual 'Berserker' rocket launcher and heavy composite steel armour. This tank can really crush anything in its way.
Mesh is scratch made, animations are taken from Siege Engine.

Give credits if you use it in your campaign/map, DON'T distribute to other sites and DON'T edit without my permission.
Have fun with the model.