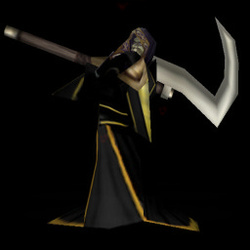 Mansion Murderer is not your average murderer map. This game is far more fast paced than other murderer maps and instead of only having the goal of "run away & hide", the players can also gather various items, attempt to kill the murderer and try to find the mansion key and then escape the mansion.

Gameplay
One of the players (chosen randomly) is the murderer and his goal is to kill everyone else.
The other players must survive, find the mansion key and then escape through the front door (at the start).

There is a timer displaying the killers life at the upper right corner of the screen. Once this timer reaches zero, the killer dies and the game ends. When the killer kills somebody the timer resets to 3min (unless he has more time remaining).

The game ends when all victims are either dead or have escaped the mansion or when the killer dies.

Normal chat messages are floating texts above your unit.
You can also shout to all players by typing "-s" at the start of your message. However, shouts are anonymous.

- Many items scattered around the mansion

Weapons, armor, weird mushrooms... They can save your life!

- Every weapon and armor can be seen on the wearer

- Game and Player statistics at the end of the game.

The whole course of the game will be revised at the end. The revision will show who was chosen as the murderer, who killed who, and also personal stats for each player (such as kills, items used, status)

Make sure to turn your wc3 music and sound on!

- Creatures that wander around the mansion trying to kill everyone

Don't even try to fight them without a weapon. Unless you really want to spectate

It could be YOU!

- The mansion key is always hidden at a different location!

See how fast you can find it!

Actually they're very easy to find. Just keep your eyes open for levers sticking out of bookshelves

Once dead, you can use the left and right arrow keys to switch between players you wish to spectate

Don't sit in one place for more than 15 seconds or you will face a nasty surprise!

If you spam, you will be silenced for up to one minute.

FAQ
Q: What kind of game is this?
A: A murderer game. One player is the killer and must kill others. The others must find the key and escape the mansion or kill the killer or wait until the killers time runs out.

Q: How many keys are there? Where are the keys?
A: There is only one key and it is always at a random location. However there can be fake keys that look like the real one but they do not open the gate.

Q: How many killers are there?
A: One. He is chosen randomly

Q: What happens if killer dies?
A: The other players (that are still alive) will win the game. But if the killer dies very early in the game (before 3 minutes of gameplay), another killer will be chosen.

Q: I can't see anything!!
A: Switch off the lights from your room and you should be able to see just fine. Also make sure your brightness settings are reasonable.

Q: How to change camera?
A: The camera is locked to your unit and you cannot change that (at least not in the current version).
Besides, if the camera would be like the default wc3 camera there wouldn't be any challenge or feeling to the game.

Q: How do I know if I'm the killer?
A: You're told in the beginning of the game. Also, if you find your character having the skill "Killer Form" and "Shadow Run" then you most definately are the killer.

Q: What if the killer finds the key?
A: Doesn't matter. The killer cannot pick up the key and it is indestructible.

Q: Where can I get a weapon?
A: They can be found on the floor scattered around the mansion

Q: Is this map protected?
A: No, from version 0.49 onwards this map is open source for anyone to edit!
Hints & Tips
1) Like said before, switch off the lights in your room to be able to see properly
2) Keep an eye out for various items scattered around the floor. They can save your life!
3) If you're the killer, use human form to travel faster and collect items
4) If you die, don't leave the game. You can stay and spectate the other players and learn from them. Also, after the game you can see the game and player statistics

If you find any bugs or have any suggestions, let me know!

You can download the singleplayer version of this map here.