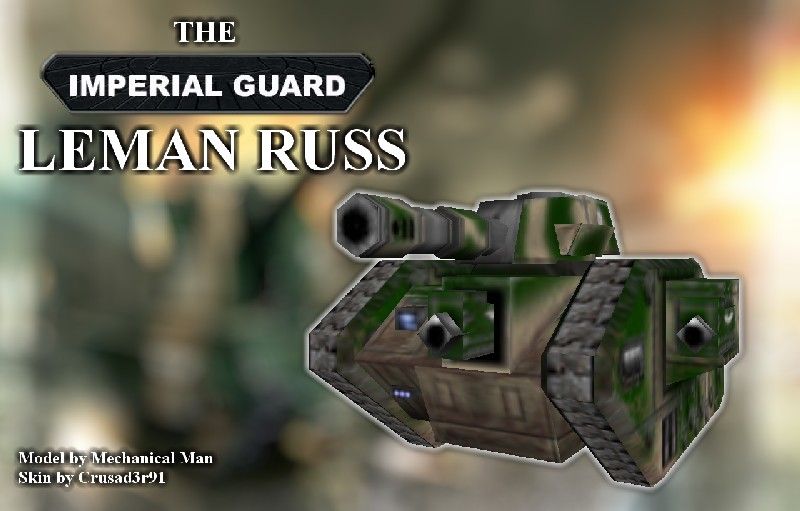 This bundle is marked as approved. It works and satisfies the submission rules.
View usage Statistics Legacy download
Reactions: Crusad3r91, deepstrasz, Cthulus and 3 others
Ok, I delayed this model for too long, but finally I made it through these animated textures. I think it looks better than old one (although certain dracophiles may consider it crap, but I don't care), but I won't deleted that old one, so it can ben used when wanting a smaller model.

The Leman Russ is the main battle tank of the Imperial Guard and one of the oldest tanks in service of the Imperium of Man. It's sturdy design and wide deployment have made it endure for millenia. It's thick armour is capable of withstanding the most powerful shots; its battle cannon can open large holes in the enemy vehicles as easy as its 3 heavy bolters mow down entire lines of infantry.

Although credit would be appreciated, you can edit this without asking permission.

Have fun with it!

let's fart now
for real, I think it's good

it's all lemanish
Ok, enaugh of stupidness, there are lot's of tanks in hive but I didn't see a tank here with a form variation like that here, nice
Koom!
Last edited: Jan 30, 2010

Models 2 Skins 1
Yeah, like the description says, have fun with it, be it commanding it, using it in a map or editing it! =)

Model has been tested ingame and works fine for us.

I agree, it would be desirable to see also buildings fo Space Marines.

Models 5 Maps 2 Spells 1
Necrons anybody? I would love to see some sweet models of them

Maps 1
i dunnno anything about modelling, but couldnt just remove the barrel and add a gatling gun and call the Leman Russ Punisher as a new model? (same goes with all the other leman russes)

Models 74 Packs 6 Tutorials 1
Very nice indeed. Looks almost identical to the original. A huge improvement from the ones you made a LONG time ago that you let me edit... XD

Icons 1 Maps 1
If you could make the basilisk, Chimera and a baneblade using the same skin, it could change the way tanks will look in the future warcraft 3

Personally, the IG's only worthwhile units in my opinion are their vehicles, such as this tank named after the legendary Primarch. Good work with this, maybe the Landraider or Baneblade should be your next goal =D

Models 5 Maps 2 Spells 1
Well the Brutes rocked until they limited them in Dark Crusade - other then that spam the [email protected]#% out of the normal soldiers.

"Dis gotz enuff Dakka for now."
Great model, can't wait for you to make more of these. I'm sure we 40K fans will shower you with plenty of reputation points... 5/5 Highly Recommended

Maps 2
I like it and wil used it. Thanks.

Icons 1 Spells 1
I'd love to see a baneblade too! Awesome model!

It's a bloody tank!