Legend of the Mists DEMO 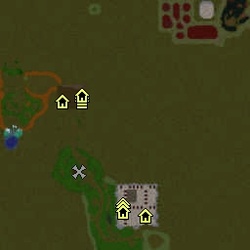 This is a RPG adventure about four heroes who have to restore the Life Spring which is destroyed by the Demon Lord, The heroes must find the four relic's to revive the fallen Life Spring Guardians who fell victim to the Demon Lords destruction.

The four heroes:
Harrison - Earth element - He was abandoned as a young child and was raised by the wild animals in he forest, He owns his own house in the forest he was raised. His adventure starts when a bear suddenly appears in front of his house.

Marina - Light Element - Marina is of royal blood and his the Kings Daughter. Her Journey stars when her father falls ill by a follower of the Demon Lord. She gets rescued by harrison when she attempts to obtain the Book of Light to heal her father.

Jade - Lightning Element - Jade is the Kings personal guard, however is worried about his recent health issues causing him to not act normal. Jade joins Harrsion and Marina soon afte they meet to rust back to the Life Spring before the Demon Lord does.

Sigfrid - Fire Element - Not much is own about Sigfrid, only that he is an angry man with a short fuse. Sigfrid joins the party later in the story.

Jake - No Element - Jake is a Demon Hunter and meets up with the party when the Demon Lord is being hunted down from the main party. Jake asks that he gets help with his training and leaves the party soon after.

More Details about this game:
There are many items to be synthsized, making your items stronger.
Thre is no point in cheating in this map, you'll get kicked.
There will be a promt letting you know the Demo version is finished, however you may continue playing if you wish.
This is the first release and will most likely be bugs i havent found out, if you find any please let me know.
SAVING is the best thing in this game. Do it often, not only just in case you die, but if you come across a bug that can be avoided.


Credits:
Credits for this map.


Thanks again for veiwing, please let me know of your suggestions and thoughts after playing this demo.. and any bugs you may find!

Now townspeople shouldn't leave town (silverkin)
Removed the damage text display (was slighty buggy)
fixed some cinematics
now the training quest should be completeable
now the boxes wont follow at all, but can still be moved when player desires
reviving fallen heroes are now cheaper (still not what i desire)
*If anyones knows how to make the price "20 gold / level of hero" , please let me know*
changed the gold bank, now the bonus rate is cheaper and only visible when player is nearby
now the healing priest heals as well as revives
Added a few more items to shops. (the ones i had forgotten)
Demo 1.1 to 1.2 Changes: