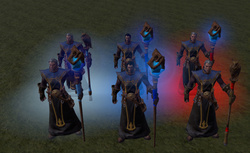 Khadgar is one of the most powerful mage in Azeroth history.He was an apprentice to the last guardian Medivh.
Khadgar destroyed the Dark Portal in the Second War,leading the Alliance Expedition to Draenor.
Returning to Azeroth, Khadgar tried to prevent Gul'dan from opening the Tomb of Sargeras but was forced to witness helplessly as the portal formed and the Legion poured through. He quickly informed important leaders of Azeroth of the impending Burning Legion invasion. Though the factions of Azeroth rallied to combat the demonic threat and attempt to reseal the portal, their armies were defeated at the Battle for the Broken Shore.

Knowing that the combined forces of the greatest champions of Azeroth are necessary to succeed in resealing the portal, Khadgar made a plea to the Council of Six to readmit the Horde back into the Kirin Tor in order to fight the demons at full strength. The leader of the Kirin Tor at the time, Jaina Proudmoore, was in opposition to this, but the Council put the matter to a vote and the majority voted against her. In response, Jaina left the Kirin Tor, unable to condone the Council's decision. Khadgar assumed leadership of the Kirin Tor after Jaina's departure and coordinated the campaign on the Broken Isles.

He was one of the main protagonists in Tides of Darkness, Beyond the Dark Portal, Warlords of Draenor and Legion.