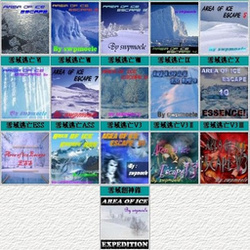 Ice Escape is a minigame, based on sliding. You're playing with your team together and try to pass all stages. There can be plenty of obstackles that you
have to avoid, while staying on your path without touching the snow. It's a very team-based game, because for example once you die, only your mates can revive you.

While the difficutly in other sliding maps usually lies on mass of patroling units, ice escape tries to base its difficulty in the ways of tricky terraining.
It's often required to click very accurately or even to abuse the car's turnrate to pass certain parts.

The key point for creating Ice Escape Template was to have a map with some standard behaviour, like on all the different terrain types, for example.
Also interactions with the environment, like behaviour on snow, should be familar, or the car's turn rate. It's good if such things don't always depend on the map you're currently playing.

Here's a little guide to get into the template.

Credits:
Thank you for your work.

Major credits firstly goes to swpmoele for the original Ice Escape series and to many of the players from iCCup who had some big influence on the road of modern ice escape.