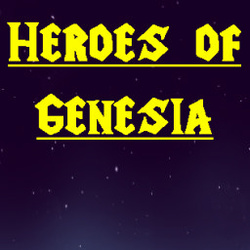 Heroes of Genesia
It an action type campaign taking place in Genesia lore.
This version feature :
5 missions
1 minigame
14 playable characters.
Highly destructible environnement
Outstanding sepcial effect.
You can replay the campaign without reseting your character progress.
More mission,more characters and more minigame will be added in the future versions.

Gameplay
You choose a hero in the character selection map.You will start next mission with selected hero.
The game plays like a Beat'em All/RTS.

Credits :
A credit has been added in game.
Musics are from Dynasty warrior 6 by Koei.
Minigame music by JinNjuice from newgrounds.
Credit music by E.S Posthumus.

The campaign require Jassnewgenpack to be opened in world edit.

01.07.09
-Fixed a bug with the campaign screen (sometime it reset model and music upon saving dunno why..)

04.02.11
-Added Army creator
-You can now create an army that will help you in mission using your gold.
-Added an hidden bonus gold coin in each level.
-Improved AI.Using attack no longer perma aggro enemies.

12.11.11
-Some enemy have a ranged attack vs hero
-updated some effect and models
-improved army creator


Infos :
You use A and D hotkey to play.If these hotkeys are not compatible with your localized Wc3 version you are allowed to edit the campaign just to change hotkey.

Character saved from previous version are compatible with this version.However if you want to have access to new character you will have to reset character stats by click New game button.

I had to emergency fix the Buggy Army creator.Sorry for the inconvenience.

If you wishe to help :

If you played the game you may notice horrible custom icon with smudge abuse that hurt your eyes.Those are made by me.If you wishe to make a better quality icon I will gladly use them.

I'd need a cool looking custom loading screen as well.If you wishe to make one I will gladly use it as well.