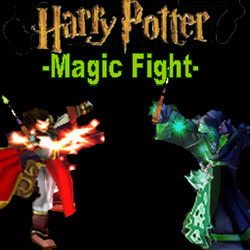 
Okay so this is a new Potter map from Lillerinmuna and Viikuna. Theres two teams in game(death eaters and order of phoenix ofc) and they fight in the hallways of Hogwarts with different cool spells familar from the books. Six players maxium in one team and yeah.

Host(Player one) will set the how many round wins it needed to win the whole game. round can be winned when all players from other team are: killed, stupefied(stunned) or under imperio mindcontrol.

SO YEAH this is [NOT] only the beta version [ANYMORE] so its not very complicated yet, we (me and viikuna) are thinking new items and maybe computer controlled units for this game and maybe couple of new spells coming. I would be very happy if people could post this forum if they play some ideas and feedback about how making this game even better, SO WRITE PLX!

Impedimenta and stupefy spells flying to pack of death eaters.

New patch here, the patch includes some visual updates and many different bug fixings. and vendors at map selling four cool magical items : Marauders Map, Invisiblity Cloak, Crystall ball and Weasley Bro's Protego hat. We are still very happy if you can give feedback and ideas for the map if you have. ENJOY!

New path nothing very big: lower prices for items and some major bug fixing..
This patch will maybe stay kinda long time, but next patch (witch can take a long time) should blow everyones minds cuz it should hold some pretty cool mods and elderwand..

Yes its here, new potter patch! This patch doesnt include the mod promise i gave earlier, but Elder Wand there sure is and its veeery cool... There is also new item "Peruvian Instant Darkness Powder" so check out what that does.. also some bug fixing again and yeah. LOAD IT & PLAY IT!

We had to make new patch cause we saw Viikuna had made hes new things for map to patch witch wasnt the newest but before it so the prises were too expansive and some items dropped false, but its all fixed in this version. Sorry if you loaded the HPMFv1.1

Oookay here is new patch im sorry we told that we wont make new patches cause here is potter again, there are some visual updates and faster spell speeds at this patch and yeah..

im sorry, but the maps name ingame is "Harry Potter MF v1.1fruitloopmixed" cuz i couldnt find any new patch that wasnt protected so i had to use one with that name...

Moderator
13:30, 22nd Jun 2008 Ash: I downloaded this map thinking it'd be like any other HP fanboy rip -- If you can't tell, I'm not a fan of the series -- however, I was pleasantly surprised. The map, basically, takes ideas from games like Elimination...
Read full review...

Daffa
Map is now playable in 1.31 patch. Edited by IcemanBo to comply with recent patch settings. Weird, it does not register the edits for some reason. Attached original version (which is broken in recent patches).
Read full review...
Reputation Statistics
Page 1 of 5
Show Ignored Content
Page 1 of 5