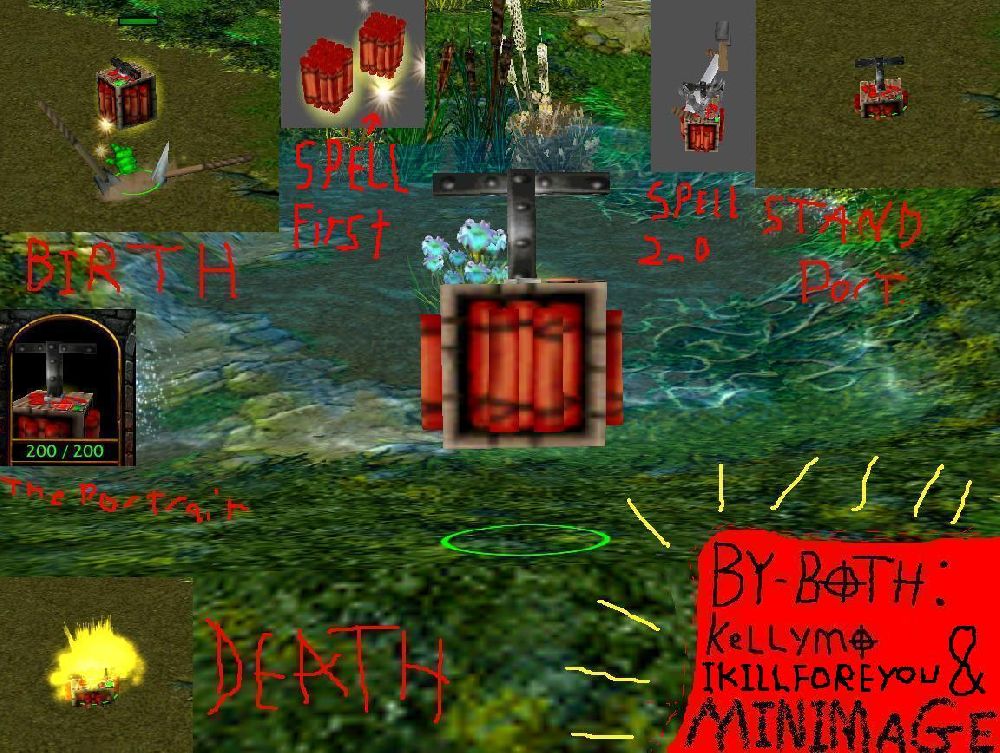 This bundle is marked as approved. It works and satisfies the submission rules.
View usage Statistics Legacy download
Reactions: Lordul Dracula and deepstrasz
This is my 4th model iv ever uploaded or finished: I dont take all credit this time.

this model was given to me by IKILLFOREYOU a long time ago from a model request--and when asked he said I could upload it if I gave him credit.

MiniMage helped me on the UV wrap and concepts of the model early on.

this Ward has 7 Animations, since its hard to screen shot them,unlike other models, il describe what they do:

Stand Portrait - 1: red light passively blinks every 0.5 seconds or so.

Birth: The bomb floats around briefly with a green blinking light as a Shovel and Pick Axe tools appear and bury the bomb. the plunger then lifts and the green light deactivates while the red one activates.

Death: The Bomb wiggles about slightly the top plunger and detonator lights fly off with un-burnt boards and dust appear.

Death Spell: The top plunger drops into the bomb fast with a good chunk sound, the green light blinks fast for a duration, and the bomb blasts apart with fire, wood shrapnel, and nail shrapnel particles. along with a large burnt out crater.

Spell First: The Bomb sits patiently with its red blinky light while a hack saw, hammer, chisel, pliers, and scissors appear, doing multiple actions, the saw hacks at the plunger, the hammer and chisel attack the detonator lights, the pliers pull off the detonator lights one at a time, and the scissors cut the detonator wires one at a time, the dismantlement tools disappear, and the digging tools reappear, digging up the bomb, the bomb lifts into the air spins and then dynamite appears with item lights to appear as ''salvaged'' dynamite goods. the dynamite disappears and thats the end of the animation.

Spell Second: This is the same at first as the Spell First, except the key difference is instead of the bomb being ''salvaged'' by the end, instead as soon as all the dismantlement tools appear and the first scissor cut on the red lights wires is made, the green light activates and then the Spell Death commences with the same blast wood/nail/fire effects hence ''failed'' dismantlement.

scale to about 1.50 thats how I sized the emitters

I know I have a bad habit of making custom particle textures I just found this particular nail texture to be both worthy and amusing, I know its hard to see at first, but once you see them you cannot un-see them. they are the black particles or ''dots'' that go out farther and faster then the wooden spinning boards.

I know that Spell first and Spell Second are not the most useful animations in the universe without heavy triggering, if you dont like them, then you have permission to delete the dismantlement tools and animations using them if you like. it is a large file size for an immobile bomb that just sits there and hardly performs any tasks other then dieing or being blown up.

Keywords:
Goblin Bomb, Goblin Mine, Bomb, Mine, Explosive, Trap, Box Mine, Blasty, More Blasty, Even More Blasty, Death to all who Oppose the Swarm
Contents


EDIT: be sure to use all the attachment points you need, there is: origin, chest, head, over head, hand left, hand right, foot and, and foot right attachment points
Last edited: Oct 13, 2012

Yea....Other than that it looks decent, yep, useful Although you might want to change the "Creators name" to ikillforeyou because at the moment it says that you made it.

Models 51 Icons 1 Skins 1 User Interface 1 Tutorials 1
well, he gave it to me un animated-un collision sphered-un camera portrait-ed- un particle emitter effected and un attachment pointed- and then gave me permission to upload it if I decided it worthy--

while I wont say Ikillforyou didn't do any thing because that isn't true in the least--he created the box its self and the plungers shape in vertexes at my request-- he didn't by any means make most of it, not trying to sound rude. he deserves credit regardless of how much work I put into it.

EDIT: oh! you mean the top label--ok! i can fix that

Maps 1 Spells 1
Awesome and very well made
You must log in or register to reply here.