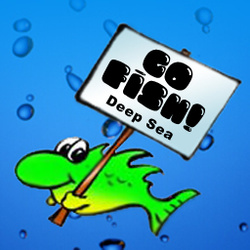 A sequel to Warcraft's favourite fishing sim! Grab your pole and a few buddies, and compete in 1, 3, or 5 day fishing tournaments.

Based off the familiar fishing grounds of the original Go FiSH!, the map has been expanded to include new mainland, including a new lake, fishing villiage, and cove. However, true to its name, its the ocean that see's the biggest addition. New deeper waters have been added, where even bigger fish live. In addition to the expanded terrain, three new boats, the Stealth Boat, the Sky Barge, and the Yacht, have been added for purchase, as well as several boat upgrades, including the spectacular FiSH Finder! Keep your eyes open for FiSH Food, a special, all natural treat that grows on the mainland. Many other additions have been made, including a variable-length tournament selection (one, three, or five days), as well as a Free Fishing mode for single players that has no time limit. Plus, more easter eggs than you can count without taking your shoes off. Its all the fun of the original Go FiSH!, and a whole lot more!