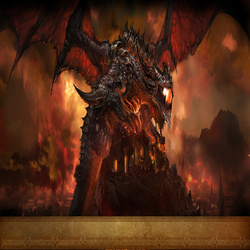 Fire and Blood is a classically themed single-player RPG in which you control a party of four heroes. Loosely inspired by Warcraft and WOW themes and lore but original in scope and mythology, your group of four young adventurers explores a mystical and lavishly designed world fraught with adventure, danger, and loot.

I designed Fire and Blood as a 'back-to-basics' solo RPG. Initially you choose four heroes from a pool of 20 different character classes, of course making sure to balance your party between might, muscle, and healing. After the opening cinematic you are free to explore. Freely travel back and forth between overwold maps, and explore dungeons as often as you like to collect the best loot and acquire powerful abilities.

In this initial release, the gameworld spans four separate maps--three overworld and one dungeon (my plan over time is to include 3 more dungeons and 6 more overworld zones, but at the pace I work, I feel it prudent to release just the first chapter).

Of course, to attain real ultimate power you need some serious heroes! Draw your heroes from a pool of awesome and unique warriors. Each hero has 1 innate ability, which is mana free (or passive), four basic, levelable abilities, and one ultimate ability (achieved at level 7 in the alpha). The strategies you use and the gameplay experience you have is largely determined by the group heroes that you pick!

Fighter Archetypes
Primary Attribute: Strength The Fighters are the shields of your party, with their innate ability to taunt and their high armor and hit points.

Thief Archetypes
Primary Attribute: Agility Useful for speedy attacks and mana-independent DPS, this group has quite a few tricky abilities that serve many different purposes...from pickpocketing for gold to subduing foes and controlling combat.

Wizard Archetypes
Primary Attribute: Intelligence These are your nukers, your big guns, and your crowd-controllers. However, once their mana runs out they are dead in the water.

Healer Archetypes
Primary Attribute: Intelligence A member of the Healer class is absolutely essential to the success of the party. While defensive by design, some of these casters also have surprising offensive abilities, especially the Shadow Priest.

Summoner Archetypes
Primary Attribute: Various This group is the maverick, hybrid class. Each hero summons a type of pet (or totems) to enhance their basic abilities.

The story of Fire and Blood starts very simply. Your four young heroes have lived their lives training in the martial and mystical arts with the Warmasters, an ancient and monastic military sect. The Warmasters, though very small in numbers, have a long history of aiding kingdoms in need, battling for good when their need is called for. Before any padawan can attain the title of Master, they must complete what is called the Gojun A'am--simply translated as 'The Quest' However, Gojun A'am is not defined. A padawan must discover his or her purpose over the course of a yearlong journey out into the world. Our story begins on the Gojun A'am day of our four heroes, as they leave their monastery and begin their pilgrimage in search of their quest...

I downloaded a butt-ton of models and skins from WC3 Campaigns and the Hive for this project. I take no credit for the beautiful custom skins and models in this project. Credits:


Thank you for reading! I welcome your feedback and bug reports.
Cheers!