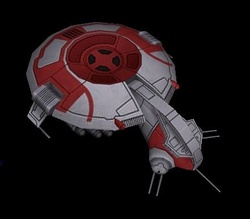 Next up in my Star Wars-series is the CIS HMP Gunship. It is one of the less known CIS vessels, as it was only featured briefly in the movies (during the invasion of Kashyyk), but it was a playable vehicle in Battlefront II, and in my opinion one of the coolest ground vessels in the separatist army. The best part about this ship is that it's generic nature means that it can be used in a variety of different maps not related to Star Wars.

Its scale is large when compared to the spaceships, but quite small if you compare it to most ground units (which you propably want to do). As a ground unit, i use it with the scale 1.4. Like with the other models, it looks cooler if you set the turning speed low and the object interpolation high, for more smooth movement. This one also comes with sprite attachment points, which means it will start burning when damaged (remove these in magos model editor if the effect is not desired).

If you want it to have a laser attack, use "attack 1", and for a missile attack use "attack 2". There is also a barrage animation named "spell slam". Tomorrow i will upload a custom missile model for this.