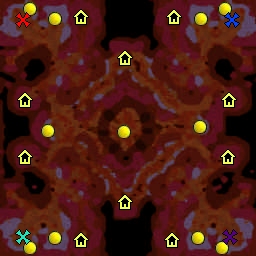 This bundle is marked as useful / simple. Simplicity is bliss, low effort and/or may contain minor bugs.
View usage Statistics Legacy download
Draenei Homeland always was difficult place to live. Strong winds and lack of gold make it very hard to survive. If you want to win, you have to conquer as much terrain as you can.

This is my first (uploaded) melee map, but I've made thousands of maps before so you can be sure of high quality.

The main idea is to make game faster. At start you have small ammount of gold so you must expand very fast to get to gold mines before other players will do it. There isn't much place to build on your starting position so you have to go on lower positions if you want to build a base.

I hope you will like it! If not... Then please tell me why and I will repair it

Maps 6
You have done a lot things wrong - but its normal for the first meele.
Ill review your map completly later on and give you some tips of creating meeles.

This one will never be really high-quality - ill tell you later why. But I smell some talent in you.

Packs 1 Maps 35 Spells 8 Tutorials 6
First of all, your description at hive was acceptable. But, the packaging of it look plain and boring; you could have use some structure and adding screenshot to make it look more interesting.

Second, the moment I play the map; the first thing that comes to my mind was resources and creep issues. The amount of gold at the beginning seems to be too low as it only worth 7.5k and yet guard by level 6,4 and 2 level 2 creep? I don't think that was fairly balance. You could increase the gold mine values to 10,000. I think it was much reasonable at 10k instead of 7.5k consider the strength of the creep.

The amount of lumber available was generally too low and certainly at overkill stage, you got to fix it.

As for terrain, the middle of the map lack tiles variation and height; look way too plain especially when it was that big.

I also strongly against the idea of having creep guarding tavern. For a blizzard melee map standard, there is no creep guarding tavern; even if you're trying to make an exception over this issues. The creep that guarding the structure seems to be too strong and definitely not worth to fight especially when your resources was soo limited that you are forces to pick your target carefully.

In other term, it isn't worth to fight the creep that are guarding the tavern.

Despite the problem, this map could be approve and my rating for this map was 2/5 (Lacking).

Well, there is a lot more issues about this map that I would like to explain to, but not at this moment (Got thing to do). I think I would saves me some time in explaination by giving R.Gaming_Strike the honor of explain the rest of the issues. XD

Maps 2
I wish I got reviews for my maps lol. But I am thankful for Septimus' reply here. This brought up a lot of things I need to work on. Again, thanks. As for the map, it looks kinda boring, spice it up

Maps 4
but first look here to help with your description. Try to add screenshots as well.
Last edited: Jun 15, 2010

This is a translation of a Starcraft 2 map. Accept it as that.

The work on the terrain is decent, it doesn't look awful like a lot of melee maps do. However, the layout is a bit difficult - some narrow passages that cripple movement of large armies due to the pathing system in WC3, you have to take that into account when terraining. Didn't really take good notice of the item drops so I'm blank on that part. The amount of resources available is also very limited - even if it was intended, it could safely be increased slightly. Don't guard the tavern.

At first, this melee map seemed good. It's because the minimap doesn't let you take a look at the cliffs. There is no pathing for large armies. A common mistake. I'm telling you: those cliffs between the middle island and the player's base except those which surround the island should be removed.The landscape is actually well textured. It's the only plus of this map.On top of this, there are pathing holes amongst the trees which not only allow low-collision units (such as Wisps) to hide there but also reduce the already small amount of lumber available.I also did not appreciate of the fact the outer expansions were covered in a dome.
The drops were yet another disaster. Items' level shouldn't be random. They have to be adequate to the creep camp which drops it. I suggest opening a Blizzard map to grasp an idea of the balance between creeps and their drops.
Yet another melee map I catch with creeps guarding a Tavern...
My rating for this map is 1/5 (Unacceptable). The map is obviously Rejected.
You must log in or register to reply here.

Reign Of Swords : Return to Homeland