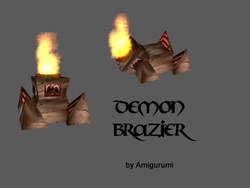 Another simple model for my demon doodad pack :3

Just a small brazier (demon style ofc), with a death animation.
In the death animation, the fire still exists, but the particles fly with
a real gravity in the air. I thought: Why should it stop burning, when
it's only falling from the base?

Have fun with it

*Do not edit or distribute this model without my permission!*
*Give credits if you use it in you map/campaign!*

- removed the unneeded frames, which I forgot