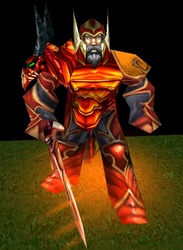 Lore: "Long before Davion join the Sentinels in their ravaging clash against the Scourge, he was once a Paladin trainee, learning the ways of rightousness and the Light. However, returning from a daily training he found his village completly burned to ashes, and above, a flying creature, red just like blood, spitting fire against his home. Davion could just watch his friends, family were devoured by flames, while the creature loose a malicious laugh. Completly consumed by vengeance, he knew that a simple hammer would not hurt, nor kill a creature heavly protected with scales, so he takes his father sword and set a hunting track against the monster who killed everything that Davion loved. For 25 years he wandered with no clues about the dragon. Once again he finds the creature, finishing its cataclysm on another village, Davion had not second thought, he followed the dragon into a cave. The fight was hard, most of his armor was destroyed by its flames, however Davion's desire for the dragon head was so great, that unconsciouness he managed to decapitate the beast, the Dragon's blood bathing Davion's body. As he were bathed, he was adquiring the powers of a dragon. With a new purpose, he traveled to a local village and asked the Blacksmith known as Feranor Steeltoe to forge him a mighty armor with the skin and scales of the dragon. Now, enhanced with the powers of the dragon that he slained, he travels with a mission to rid the world of any evil that crosses a innocent village. But what powers, a dragon blood could give?"