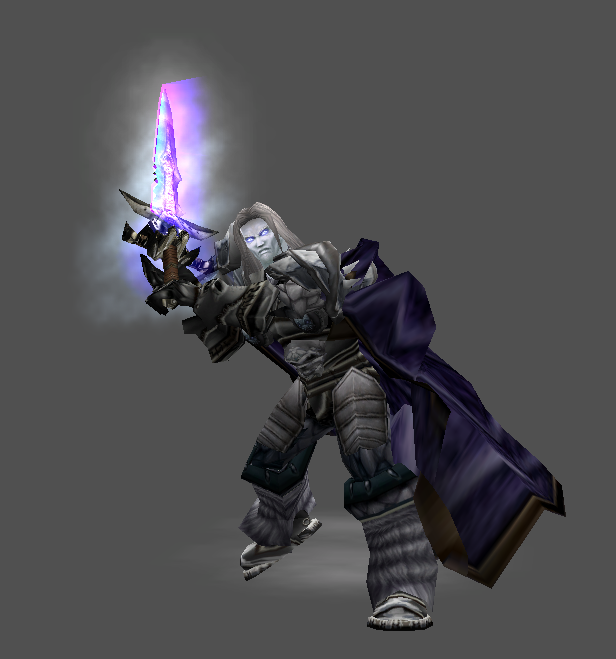 This bundle is marked as awaiting update. A staff member has requested changes to it before it can be approved.
View usage Statistics Legacy download
Reactions: Achille, 放假好(Good holiday), Mr. Bastard and 11 others
The user Alca on Discord reached out to me asking if I had an Arthas equivalent of the cinematic Illidan that I made a few years ago:
https://www.hiveworkshop.com/threads/cinematic-illidan-by-retera.331201/

Unfortunately, when I looked into it, although I had tinkered with something like that to create a customized hero model in the past, there was not a point in the WIPs of that model when I had a polished "cinematic Arthas" made with my toolset and skills. Although there were some interesting WIPs going in that direction, nothing was a usable in-game arthas model.

So, I suggested to Alca that he should try to use one of the many existing Arthas models from Hive and linked a few, but he continued to claim that there was not a model that felt to him like it was literally the artwork of the cinematic Arthas asset put into an in-game unit model. I think we all have seen custom models with a custom hero model of this style of Arthas once or twice, but in my (Retera) personal opinion we probably cannot beat the Kwaliti Lich King remake in terms of WoW-style in-game Arthas, and we probably cannot beat "Arthas (wielding frostmourne)" ingame model with the texture of Undead Arthas if our goal was an old War3-style dismounted Undead Arthas model.

Probably that is why for me, there was not ever a reason to try to make an in-game model out of the cinematic Arthas character, because regardless of the style of the map (WoW+ newer style, or Wc3 2002 style) there was always a better solution for me. But, nevertheless, after Alca kept asking about this and sent me multiple custom Arthas models (the origin of which I did not ask about) in the hopes that I would improve upon them, I finally decided to try to make his original request as a derivative work only from ingame Warcraft III models.

Given that I am almost certain I have seen a copy of this model made by someone in the past, but that I do not know where it is and do not have it, I have gone out of my way to tag this model as Open Source so that if anybody out there actually wants it they can also feel free to modify this model in any way.

As far as the origin of how this model was created, we could note that there are actually 3 versions of this guy in the Frozen Throne data files:

Each of the models is slightly different. Rockin' Arthas doodad has glowing eyes, the undead campaign screen Arthas has pupils, and the Arthas vs Illidan fight cinematic has empty white eyes. The three models are clearly derivative works of each other, but they are not the same. Rockin' Arthas doodad has thinner fingers with which to play the guitar, and they are curled by default in the T-pose. The campaign screen arthas's feat are tilted to the left in the T-pose so that he ends up looking good from the side. Rockin' Arthas has static hair, while the other guys have crazy geometrically repeating hair with a prebaked wind animation that doesn't fit well into the War3 engine without a lot of work.

So, for this particular model uploaded here, I used:
The result is an Arthas hero that kinda works, but also looks like this old cinematic/campaign art. As I mentioned, surely other people have made similar models, but this is a version made with Retera Model Studio 0.04.3 and Reforged animations, so maybe it is stylistically slightly different and could fill the niche for somebody who needs an open source cinematic campaign Arthas using these old fancy Arthas models that existed in the 2002 engine but weren't quite available for use as an in-game character.


As always, if you want to put the Lich King in your map, just use Kwaliti's work because it's amazing.

When using this model, to make walk animations look good, you should set the following properties in the Object Editor:
Otherwise, this guy might not know to play his Walk Fast animation, which he will be smart enough to do by default if you set these Object Editor settings!
Previews 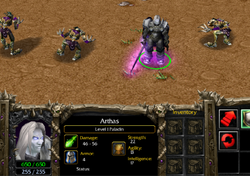 ILH
There are several issues that you need to fix: Model needs a collision shape. I can hardly see a difference between the "Stand" variations, please add some changes to the animations or remove them instead. You don't need to check "Unshaded" on the...
Read full review...

Is it possible to give him more action (attack) with his guitar? I also like the weapons he uses, his guitar moves, and his standing action, but this one looks better than some of the game's campaign screen models that I've found to be the best. .
Last edited: Apr 28, 2022

This is making me feel pretty good for not knowing what anima is. Maybe that was part of the word soup that came out of someone's mouth while they talked on a YouTube video about a game I don't play, sometime a while ago, but I forget.

Retera said:
This is making me feel pretty good for not knowing what anima is. Maybe that was part of the word soup that came out of someone's mouth while they talked on a YouTube video about a game I don't play, sometime a while ago, but I forget.
Click to expand...

"Anima" is energy/essence in which Covenants like the Ven'thyr harvest from souls: prideful ones like Garrosh boast far more anima than humble ones.
The "35 Anima" in which I mention actually is a response from viewers who woefully watched the 9.2 Cinematic, where Sylvanas, Uther, Jaina, and Anduin see "that fading bluish spark" that was once Arthas' soul. <--That's the 35 Anima people refer.
Many people, like myself, were not happy at how Blizzard ended their Golden Boy.

"Agliboo" is the power/strength with which Promises like the Ban'kir devour from spirits: angry ones like Garithos boast far more agliboo than calm ones. The "35 Agliboo" in which I mention actually is a response from viewers who woefully watched the 18.7 Cinematic, where Shandris, Naisha, Drak'thul, and Staghelm see "that fading green spark" that was once Illidan's soul. <--- That's the 35 Agliboo people refer.
Many people, like myself, were not happy at how Blizzard ended the Lord of Outland.
Click to expand...

This is what it reads like to me. It just sounds like fanfiction with all the names thrown in from the "Campaign" section of the unit editor. Of course I know I am not correct and I am just making a parody here, but I am trying to share my feeling from when I read it.

This is a great model! Although there are a few clippings in the cape, but is not that obvious ingame so its all good.

Models 21 Icons 1 Spells 1 Tutorials 1
There are several issues that you need to fix: