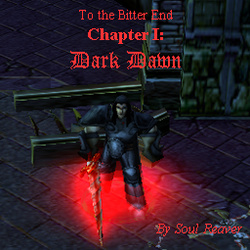 This map is now available as part of a larger, updated and enhanced Campaign file. The campaign includes the conclusion to this epic, so it is strongly recommended you play the Campaign instead of this slightly outdated version of the standalone Chapter.

The immortal warrior Soul Reaver awakens to find himself imprisoned upon a foreign, hostile world. His memories lost, his equipment stripped from him, and his companions gone, things are looking bleak. But fate is often fickle, and can be quick to turn...

Take control of Soul Reaver to sneak and fight your way out of Greyholm prison in your greater quest to reunite with your companions and take your revenge upon the evil sorcerer, Morganem.

Put the .w3x file into a folder named "To the Bitter End" (without quotation marks, obviously) in your Warcraft III "maps" folder.
You can play the game by starting The Frozen Throne, then selecting 'Single Player', 'Custom Game', and then navigating to the map and selecting it.
It helps to have your video settings for Warcraft III set to high quality, or some custom skins in some of the campaign might look a little... weird.

To the Bitter End is supposed to be very difficult. However, for those finding it simply too tough, as of version 0.7.04, I have added in variable difficulty levels. Once in-game, press Enter to bring up the chat window, then type in "easy", "medium" or "hard" (without quotation marks) to change the difficulty of the current Chapter. The default difficulty is "hard". Note that the only thing this modifies is the HP of enemy units, and enemy hero units are less affected than normal units are.

For further info and an extensive manual, check www.familykrieg.com/tothebitterend

This is the first of a series beta releases, it is suggested you play this one before Chapter II: The Dream of Blood.

They can all be found at the official site at http://www.familykrieg.com/tothebitterend/.

To check the version number of any of your TTBE maps, type "version" (without quotation marks) into the chat text in-game and it will display (or if nothing displays, then your version is definitely out-of-date). The newest versions are always available on the official site.

Although I am solely responsible for creating this map, the central characters featured in this campaign, as well as the Multiverse in which it is set, were envisaged by the writers at The Administorum (http://theadministorum.yuku.com/) and its newest incarnation, the Administorum 2.0 (http://nerdramblingz.com/starforums/index.php).

This was my first serious attempt at a campaign map, and my first release. I was going to wait until I had completed the campaign in its entirety before releasing anything, but at the request of one of my Administorum friends, I decided to release the completed Chapters here. Since the campaign itself not complete, this classifies the maps as beta releases. Unfortunately, with all my current commitments, it may be some time before I get all the maps done.

- The map sometimes begins to slow down significantly near the end, although this doesn't happen to everyone. This may be due to a memory leak which, despite huge efforts on my part, I've still not been able to find and eliminate. (Workaround: if/when things start getting a bit laggy just save the game, quit the map, and then re-load the game.)
- Sometimes, even if you win, the final battle does not end the map immediately, although this does not always happen. (Workaround: wait for a minute and you'll still win. And make sure all of the enemy are dead.)
- Does not automatically start Chapter II on completion (Workaround: start it manually - your character from Dark Dawn should transfer into it fine.)
- Some of the characters' textures look strange. (Solution: set the texture quality in the video settings to the highest available setting).

- It is possible to skip any of the cinematics, just press ESC.
- One 'bug' that occurs if you skip the cinematics is that any items or abilities that might have 'cooled down' and become available over the course of the cinematic will now not do this. This means that if you want to use those items/abilities often, you may have to wait around more... and if there's a timer counting down while you wait, that might not be advisable. This isn't a major thing, but it does mean that the game might be more difficult if you skip the cinematics.
- You are advised to watch the cinematics at least once. They will often give you instructions as to what to do next and offer clues as to what to expect. Making sense of the game plot without them would be pretty difficult.
- If you want to be sure to experience the game how it was meant to be played, then don't skip the cinematics. That's how I planned the level out and how I spent the most time testing it.

- Use your quest log if unsure of what to do next... that's what it's there for.
- Read the tooltips if you want to know what an ability or item does. In fact, this is strongly recommended.
- Your items are re-usable. However, they have long cooldown times... and you have to find them first. Save them for when you need them, and then unleash hell.
- Your items are a lot more powerful than your abilities this early on.
- When you gain a level but your skill points don't seem to have increased... well, it's probably because your "Master of Battle" skill has levelled up automatically. Don't worry, it's a point well spent.
- You will not reach your maximum experience level in Chapter I. Obviously.
- Your quest is likely to be quite tough. SAVE OFTEN.
- Don't expect to find Raziel from the Legacy of Kain series in this game. I've been using the name Soul Reaver for my RPG alter-ego since long before even the first Blood Omen came out. The Soul Reaver in this map is an original character.

Q: Why is the main character called Soul Reaver? It's a bit of a strange name.
A: In terms of his background, Soul Reaver's powers come from his control over his own souls, and to some degree, over the souls of others. He actually has the power to absorb the souls of his fallen enemies, but he does not usually do so. However, I decided not to include this power in the campaign. Besides, 'Soul Reaver' isn't his given name - he chose it as his name when he left his mortal life behind.

Q: If Soul Reaver is an 'immortal', why can he be killed?
A: In the Multiverse, immortality and invulnerability are two different things. Immortals are individuals who cannot die of old age. They usually possess incredible resilience and regenerative powers that maintain their bodies at a certain age and in a state of good health (and conveniently replace lost limbs, worn down teeth and such over time as well). However, if they are killed, they will usually stay dead... although thanks to their formidable powers, even that isn't always the case.

Q: Who's this 'Slayer' guy?
A: Slayer is a character from the stories in The Administorum. He has sided with Soul Reaver and the rest of the companions in the past, but he tends to do so only because it also happens to serve the goals of his enigmatic and unseen 'master'. He usually tends to show up, interfere slightly in the current state of affairs, and then vanish again. Don't expect to see him helping you out directly in the campaign - it's pretty typical of him to come offer a hand temporarily and then forget about the companions for a year or more at a time.

Q: Wait, wasn't there once a character called 'Clutchfiend'? Why is he called 'Cameron Aileron' now?
A: Ah, retcons, the bane of my existence. The guy who invented the character of Clutchfiend recently retconned his background (and name). Since I liked the changes he made though, I incorporated them into To the Bitter End. Thus, all references to 'Clutchfiend' have been changed to 'Cameron Aileron' from version 0.7.04 onwards.

Q: What's the name of that cool song you used for this map?
A: "The Wretched", by "Nine Inch Nails". Buy the album, it's worth it.

- Me, for being insane enough to make this all by myself.
- Cameron, Kitharsis, Fei and all the other writers, past, present and future, at The Administorum. That place wouldn't be what it is without you guys.
- Larc for helping me with some weapon models. You were quick, efficient and extremely helpful in resolving a major map issue. Thank you!
- Thanks to all the folks at The War Center map making forums (http://www.thewarcenter.com/forums/index.php?showforum=11) for helping me in my early days and inspiring me to keep trying. Special thanks to 1)ragonspawn for helping teach me how to deal with memory leaks.
- Everyone who submits their custom abilities and spells freely for use at www.wc3campaigns.net. You helped teach me how to do this stuff and provided a lot of inspiration.
- Warnicro from war3.incgamers.com. You put a lot of work into getting my map links working and then even put them up as featured maps, not to mention all the other help and comments you've been prepared to offer. I really appreciate all your efforts.
- Filefront for offering me the chance to host my maps there.
- NIN for creating the music I used. I don't claim to have written this myself.
- Everyone who play-tested the maps and gave me feedback. Thank you for taking the time to play.
- All the fans. It means very much to me to know that you enjoy my work.
- Everyone who gives me constructive feedback or takes an interest here. Thank you in advance. Tell me what you think! E-mail me (meet_soul_reaver@hotmail.com) if you have comments or questions about 'Dark Dawn', the 'To the Bitter End' campaign, the Multiverse, or Soul Reaver.

Please do not redistribute or modify these files without my permission. These map files are not to be sold for profit.