This bundle is marked as approved. It works and satisfies the submission rules.
View usage Statistics
Reactions: Forsaken, Apheraz Lucent, Sin'dorei300 and 2 others
Just made a request. Have fun!

21:02, 5th Jan 2015
Sin'dorei300: Still, the eyebrows and the eye-glow are kinda blending, they doesn't stand out too much.
Define the eyebrows better and make the eye-glow less solid, to look more transparent, smoke-like.

Packs 1 Maps 20 Templates 5 Tutorials 1
Seems alright but he looks like he doesn't have a neck or something.

Maps 3 Templates 1
Good and very useful. It can be used as a "dodge" or "fade" spell too, not only mirror image.

Icons 165 Packs 2 Maps 2 Spells 4
Frist i have to say you did an exelent jo bon this, vers good indeed.
Now for improvements you might consider maling the shadow longest back (the one on the right) naboer to be seen though the middel one. And make that shadow more transparent (or darker colors)

But beside that, a very Nice work by you

Golden-Drake said:
Frist i have to say you did an exelent jo bon this, vers good indeed.
Now for improvements you might consider maling the shadow longest back (the one on the right) naboer to be seen though the middel one. And make that shadow more transparent (or darker colors)

But beside that, a very Nice work by you
Click to expand...

I don't quite understand what you've been sayin'. Pardon please?

~Nightmare said:
I don't quite understand what you've been sayin'. Pardon please?
Click to expand...

Models 1 Icons 7 Packs 1 Maps 3
Looks like an ancient card figure to me. Anyway nice one!

Icons 309 Packs 18 Maps 48
Only thing i see is i would make the opacity of the spell breakers to the right a little more down so they seem like they are getting ready to move fast.

Before anything else, I'd like to talk about motion. In Warcraft, motion is rare on anything other than missile-alike abilities. However, there's one perfect example which also is a counterpart and I believe the inspiration for this icon, which is the Human Invisibility.
Now, the human Invis icon has nearly same opacity values for all three sprites of your icon, but yet, it looks like it's moving while your icon doesn't radiate any movement. Why? The Human Invis icon features one thing your icon doesn't: lack of detail. Yes, I've said it right, the only thing that makes the HI (from now on to shorten up) full of motion, is lack of details. This icon is too crowded in colors that blend in with each other a little too much, since there's no visually strong outline, other than the thick black line in between the images.
If we take a look at your icon, and focus on the red helmet for a second, we'll notice two things: first thing is that it covers up nearly half the icon (featured in all three sprites), and the second one is that that the helmets blend in too much with each other, nullifying motion and replacing it with dazing blur. In order to fix the first issue, which is the helmet covering up the entire icon, I'd suggest either a different view angle (perspective, not quite too much to the side like the original Mirror Image, but something in the between this one and that one), which is the longer way but would yield better results, or to apply dramatic shading. Dramatic shading will also fix up the second issue of helmets blending in.
However, it's not as easy as it sounds: it's more than going crazy on adding light and shadows (which, by the way, lack completely (both) in this icon). You need to find a way to make the part of the helmet closest to the face lighter or darker, and the other end should be the opposite. If light was done on the inner edge, and shadows on the outer endge, the helmet would now instead of "red -> red -> red" go to "white red black -> red black -> red black" (white part is covered up now), and that would also improve a LOT of motion too.

Now, I've already mentioned there's the issue of both face and armor completely lacking any shading or a light source, and there's also the issue of eyeglow being nearly in the direction of the motion, making it ruin the duplicating effect. I'd try with a more circular glow, and then add a very slight and much shorter motion to the upper corners.

Believe it or not, this would "fix" the entire icon in all possible fields: from execution of shadows and light source, over render, movement, depth and angle positioning.

If you had issues understanding what I was trying to say, feel free to ask and I'll do a quick makeover of the icon to show you practically what I was meaning.

Models 3 Icons 131 Packs 5 Skins 26
Thank you very much Apheraz for your constructive review. I really appreciate it. I'll fix it up soon. 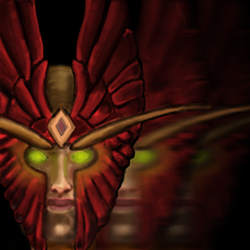 Icons 122 Packs 4 Maps 31 Templates 3
Wow, It's looks cool now, but the illusion is too blurry.
The second illusion needs to define a bit ...
Overall, it's too dark, maybe lightening it a bit ...
It's just my opinion...

Models 3 Icons 131 Packs 5 Skins 26
It is meant to be blurry and dark. But thanks for your output.

As much as I love the shadows, I feel the icon could still benefit from some light fixes, such as adding a little brighter light impact on the red parts of the helmet, and that golden thingy in between. The diamond thing could instead use some shading on the lower part.

Nonetheless, this is a indeed amazing update, and with these little fixes, it would be an impressive addition the the Hive's database.

Models 3 Icons 131 Packs 5 Skins 26
Thank you, Oh I forgot that emblem thingy thanks for pointing out.

Tutorials 4
It's good. Could be more of light impact but really that's just personal preferences. Make sure to update it and Sin will re-mod it when he has some time up his sleeve

Tutorials 4
Works for me, we'll see what Sin has to say

Maps 1
Now thats useful, I always wanted to have an mirror image icon ability for the Spellbreaker. Nice Job ~Nightmare!
You must log in or register to reply here.