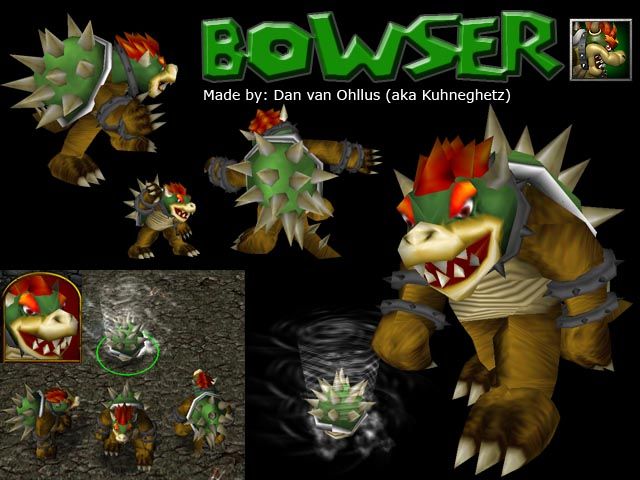 This bundle is marked as approved. It works and satisfies the submission rules.
View usage Statistics Legacy download
Reactions: deepstrasz, dEsTrucTivE_MaN, xw1995327www and 3 others
Made by: Dan van Ohllus (aka Kuhneghetz)

Character Description:
Bowser, king of Darklands and leader of the Koopa Clan, is the most evil, cruel, vile creature in the Mushroom Kingdom. He always planning on taking over the whole Mushroom Kingdom, usually by kidnapping Princess Peach and forcing her to marry with him, but Mario always foils the evil koopa's plan and saves the day.


YOU MUST GIVE ME CREDITS IF YOU USE THIS MODEL IN YOUR MAP!!!

Remove war3mapimported\ (or war3campimported for campaigns) and restart World Editor.

MDX files can have any path.


UPDATE:
- The seperate geosets on the Bowser mesh is merged to one.
- Model optimized to lower filesize. Before, it was 282kb. Now it's 169kb.
- The spinning shell is now built in the main model when the new Attack Walk Stand Spin is played.
- Added external portrait that has talking animations.

UPDATE2:
- Fixed a glitch on the previous update which showed that a vertex of Bowser's shell was attached to the wrong bone part. So please re-download this model if you have downloaded the previous version.

Models 23 Skins 1
I love mario characters, and bowser is my favorate, looks perfect 9/10 though, cause hes not as beefy as bowser should be, and he should slouch a little. other than that, perfect!

Models 12 Icons 2 Skins 1 Maps 1
Holy shit that is awesome. DO THE KOOPA KIDS! And some doodads!

His stomach is slightly too small though. i would say 4/5! Can you make Princess peach, a koopa, and The Chancellor from super mario RPG next?

Models 2
High time someone made a cool mario map. Great work there, 5/5.

Maps 4
Works ingame? not for me, have i imported wrong? pls tell me

With what Program you creating models ???

With what Program you creating models ???

Models 1 Skins 1
superb model, i hope you will make more of the mario characters because that was one of my favorite games growing up 10/10

I agree with King stubby but
HOLY SH!T THATS AWESOME

Models 2 Skins 2 Maps 2 Tutorials 1
Nice model! You really like the heroes of these games eh ?

Maps 2
Uuuh... if he is not in our world so that he can give you some money, how can he kick my ass whe I would not give you credit (not that I'm making any maps but still ^^)

Models 121 Icons 104 Packs 3 Skins 8 Maps 1 Templates 1
DarkKnight: He'll might not kick your ass literaly, but he will make your map crash if you don't give me credits. ;P

Edit : Hmm it don't works...
I import models + usefull Files
Restart WE and then I will change the Model to Bowser, but he say he can't open the Data &quot;Bowser.mdl&quot; =(

Maps 3
Once again, another amazing model from Dan Van Ohllus! This is amazing 10/10, and you've made so many Nintendo models, but we've been yet to see a DK one. Do you plan on making one? Cuz it would PWN!

Icons 2 Maps 2
Well, I've used your models in Mario Tag. I'll make sure to give u credits. Oh and btw, if you ever make the DK model, it would be easy to start from sasquatch model. just a suggestion

Models 29 Icons 30 Skins 7 Maps 3
Much better than my old geoset merge. I'd recommend people to use this one instead.

Maps 2
can u make a giga bowser

what are the paths for the icons?

what are the paths for the icons?

Scorescreen icons can have any path.

Maps 2
Great model and all I really do like it but one slight problem, when he moves he only slides Maybe make it so he doesn't?

Unfortunately for Bowser, he fails at dominating the world and Dan wins. 5/5

Models 121 Icons 104 Packs 3 Skins 8 Maps 1 Templates 1
UPDATE:
- The seperate geosets on the Bowser mesh is merged to one.
- Model optimized to lower filesize. Before, it was 282kb. Now it's 169kb.
- The spinning shell is now built in the main model when the new Attack Walk Stand Spin is played.
- Added external portrait that has talking animations.

Models 121 Icons 104 Packs 3 Skins 8 Maps 1 Templates 1
Whoops, I noticed a glitch on the updated model. A vertex of Bowser's shell was attached to the wrong bone part.

I've fixed it and updated it again. So please re-download this model if you have downloaded the previous version.

Models 121 Icons 104 Packs 3 Skins 8 Maps 1 Templates 1
Give him the Bladestorm ability (or a modified version of it), or use triggers.

Dan van Ohllus said:
Give him the Bladestorm ability (or a modified version of it), or use triggers.
Click to expand...

Alright, thought so. Thanks for replying this quick! =)

It lives up to our expectations for you, DvO. Another excellent piece of work 5/5!

Oh my god it's Aaaaaaaweeesome

Thanks for the model dude its awesome! Hope the model works for me!

Now if we could only get all of the Mario Characters into a race track with their tiny little race cars...

AMAZING! Have you seen the other bowser skin more popular but not as good as this one I give this 5/5

DariotheMario said:
AMAZING! Have you seen the other bowser skin more popular but not as good as this one I give this 5/5
Click to expand...

It's because that version was released way before I planned on making my own version, thus probably having more downloads.

Models 196 Icons 24 Maps 7 Spells 7 Reforged HD Icons 1 User Interface 1 Tutorials 2
An amazing model. If I were to use it, I'd get much hate from LoL fanatics, saying it's Rammus. But I'd still use it.
You must log in or register to reply here.