This bundle is marked as approved. It works and satisfies the submission rules.
View usage Statistics
Reactions: Flade, Sclammerz, mori and 11 others
This model was made long ago and just needed the dreaded tweaks to be ready to post. Mostly ajusting the original model cape bones in the new body, and ajusting a much as possible the cape to a model with complete anatomy.

As you can see, is just a conversion using most of the BHero texture, and Villager woman face, whose face is similar with Sylvanas, Jaina and Succubi skins, so you can use any custom BM skins on Sylvanas face to create Undead or Demon versions, or Jaina and Villager woman to made human versions.

Any next update will be to create an Arthas version to use with all of Arthas skins on the database.

Added three variants, one with Arthas skin as the main base, and the other two using Arthas hair mesh.
Added a sphere variant based on the Orb of fire.
Neck and Jaw bones attached properly
Death sound changed to Sorceress.

Update: Worked on the potrait angle, and the plane Hero 6 in the ingame model was moved down during the Portrait animations to remove the shadow.

The right knee doesn't pass on the cape during Stand-2.
Previews 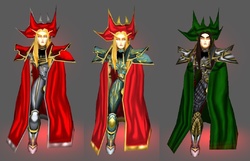 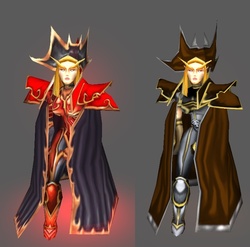 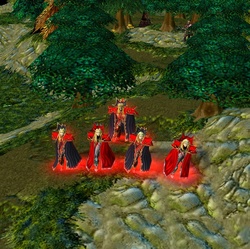 Maps 7
The quality of this vs the SD female models Blizzard put out is jarring.

Need an icon to go with this model. The fact it has additional spell animations on top of the default Blood Mage anims gives it a

Ported Models 2
Wow.. this model is one the best ones here in hive

Edit: The update is even more nicer. This model is very useful because you can easily alter it
Last edited: Jan 15, 2021

Beautiful model, although I don't really understand how the reskinning works in the way that you described?

Icons 11
Friggin love this model, this girl has so many styles! ♥

stein123 said:
Friggin love this model, this girl has so many styles! ♥

How do you get to those?

stein123 said:
Friggin love this model, this girl has so many styles! ♥

She is!
Hope Kael version of this one too. This model is so flexible when it comes to skins styles and of course the additional animations added

Models 2 Maps 1 Spells 1
Dang Stein those are impressive. Kinda eyeing that Forsaken one...

Maps 1 Templates 1
Lovely model. I would love to use these, so I hope it gets approved soon.

Models 192 Icons 126 Packs 7 Tutorials 2
The camera is tilted a little too low and makes the portrait look very weird. You might want to tilt up the camera a a bit.

Models 192 Icons 126 Packs 7 Tutorials 2
Very cool variation and edits for the normal Blood mage model.
Models work in-game and perform well.
You must log in or register to reply here.