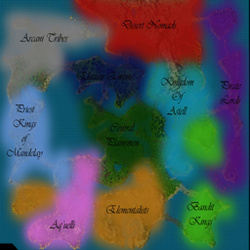 The world of Bladesong is a large diverse one, from the Deserts of the North, to the mountains of the south, from the central plains to the archipelagos of the east. It was once filled with a variety of faiths... The worshipers of Light and Shadow, Earth and Air, Water and Fire, once lived side by side. But those of the Fire initiated a crusade, and the others fell before them, until only hidden remnants remained. And the empire thrived.

Now that empire has fallen into only a remnant of its past glory, and others have risen where they once ruled. The Mandelayan Priest Kings control little outside of their Holy city, with savage Arcani war tribes to their north, the armies of the Elasian Empire to their east, and in the south the mysterious Aquelli emerge from their rain forests. Beyond them plainsmen roam, and bandits emerge from their fortresses, powerful enough to challenge even empires. The Pourtean Pirates land on the eastern shores bent on plunder, and Desert Nomads have overrun the border forts in the north. Meanwhile the young nation of Astell deploys its armies comprised of serfs and legionaries, determined to extend their lands. But perhaps most dangerous of all.... the Elementalists have long waited in their hidden fortresses, training armies to retake what was once theirs, and shall soon pour forth into the world once more.


This map is a newGen type map which allows the host to decide what the gameplay will be like, and what form the teaming shall take. At initialisation the host chooses between

A: the atypical Diplomacy style game, in which players capture circles of power which provide income, and train troops independantly from barracks.

B: LOTR style spawn gameplay where every player has a limited number of bases which automatically create troops at intervals. Spawns may be upgraded throughout the game.

Also the teaming of the game is chosen.

A: FFA
B: teams of 2
C: 5 v 5
D: Total diplomacy, in which players make and break alliances through chat commands.


This map is not protected. This is not so you can edit it, so please restrain yourself. If you DO wish to edit it please contact me, since i will probably not be conducting any more updates, and there were further things i planned on adding in. It is unprotected mainly for the purposes of helping new mappers, providing inspiration, etc etc..