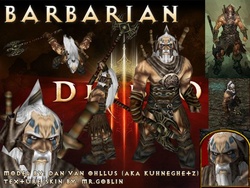 Model edits and scratch by: Dan van Ohllus (aka Kuhneghetz)
Custom texture and feedbacks by: Mr.Goblin

This model's design and appearance is based on an earlier Barbarian concept art for Diablo 3.
It was initially made for Diablo III Warcraft before that project got discontinued.
Now I bothered finished some remaining stuffs for the model and have released this guy for public.

Mesh info:
Head (minus the helm) is based on Grom Hellscream.
Body is based on Chaos Orc Range (the hidden fel orc with the Wolverine claws on his hands).
Any other meshes are made from scratch.
Animations are from Beastmaster, Grom Hellscream, Felguard, Archimonde, RoC Orc Warlock and Mountain King.
External talking portrait model is included that uses Kael's portrait animations.


YOU MUST GIVE US BOTH CREDITS IF YOU USE THIS MODEL IN YOUR MAP!!!

Feel free to edit this model for your projects as long as you credit me and Mr.Goblin for the model you based it from.

Moderator
23:42, 14th Jun 2010 DonDustin: you might say that the model itself is just a geoset merge with a few selfmade elements and a custom texture, but it was executed perfectly and the (amount of) animations are also chosen wisely.
Read full review...
Reputation Statistics
Page 1 of 4
Show Ignored Content
Page 1 of 4