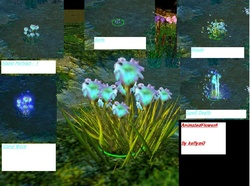 This is my Second Upload ever, As Well as My second model finished ever.

I present to you all: Animated Flower A

It uses Similar Particle effect Styles and animations, to the Cattail, But is more Complex then my other previous Cattail, using many more particle emitters. This flower is also classified as a ''Ward''.

Collisions spheres tested all animations in game they appear to work for me and what not.

Description: use the scale of any thing you want it dos not appear buggy made too big or small or anything. the particle emitters don't fit the flowers size anything past 1.9 though.

make sure you rig the death time seconds to 1.438 so that particle emitters are capable of slowly disappearing--instead of abruptly ending.

I Built this flower the way I did, so that if you want a magical ward, then you can use stand work or spell death, if you just want a normal flower how ever, then stand portrait - 1 and death are for you.

I know 2 custom particle textures is really bad but each texture is 2 kbs and the flower its self is 30 some thing--additionally, one texture is used to display blades of grass catastrophically blasting everywhere, while the other provides the ''flower petals'' that glide too and fro.

---UPDATE 1---: I noticed after about 5 days or some thing like that, that the flowers material wasn't shaded, so I changed that so the flowers at night are darker.

---UPDATE 2---: Seems that my last update didnt work, so once again, iv modified the materials to have better ingame daytime/night time shading


---UPDATE 3---: Thanks to Wraithling, for reminding me about the existence of attachment points, I have begun the large job of adding 8 attachment points to each model, iv added: origin, chest, head, overhead, hand left, hand right, foot left, and foot right attachment points. these are located around and in the model. hands and feet representing a large square of attachment points around it, front and back, left and right sides. origin chest head and overhead are just in the dead middle, ranging upwards in heights

---UPDATE 4--- ok I now have managed to change the models internal name. to help people in organisation.

--update 4-- linearized animations to make the model 1.5 kbs smaller. thought it would do more but I guess not.

--update 5-- made the 2 plane boarded vertexed materials that dont need to be double sided, not. making it even more small.

--update 7-- made all the objects that where ''helpers'' into bones

--update 8-- I had broke something so I just fixed it now.

---update 9--- When I linearized the animations using mdlvis editor, the particle emitters lost half there strength somehow, so I just fixed that too

--update 10-- in making the materials 1 sided I accidently made the stems invisible because they are not really 3d so I had to make that material layer 2 sided again.

Moderator
15:19, 25th Sep 2012 HappyTauren: It looks very nice and the death animation makes it much more awesome, so those two textures are worth it.
Read full review...
Reputation Statistics
Show Ignored Content