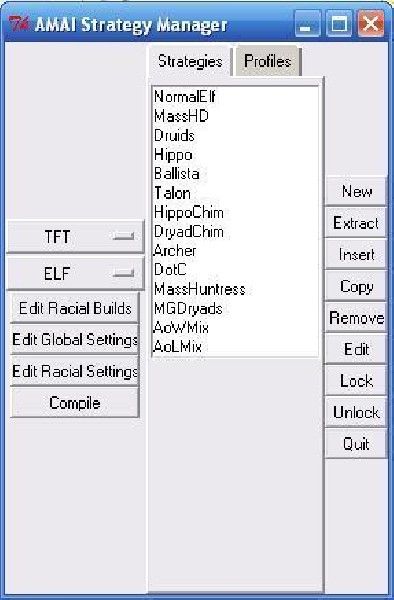 This bundle is marked as approved. It works and satisfies the submission rules.
View usage Statistics Legacy download
Reactions: Henry_AC, GhxBronie, Barade and 4 others
This tool originates from here

AMAI is a mod/tool for Warcraft III: Reign of Chaos and The Frozen Throne made to improve the computer AI of the game in many possible ways.

AMAI will make it easier to edit the War3 AI, harder to beat and more fun.

The goal is to make a human like opponent or ally that both react on events and tries to insult you by chat taunts while playing in a more human like way.

How to play
AMAI release comes with the standard AI scripts pre-built for you.

It is suggested to create a subfolder in your "maps" folder like "maps\AMAI" and copy the maps you intend to use AMAI with there. For Warcraft 1.30 onwards you need to use Casc Storages - Main page to extract a copy of official maps.

V2.54
The original 10 year old version that supports 1.24 - 1.29 warcraft.
The download for 2.54 is the developer edition intended for developers to use.
For everyday use the player edition is alternatively available to download here


NOTE: The old 2.5.4 zip is now password protected because Google Chrome is flagging it as malicious software. The password is amai. Note some of the dlls are flagged as virus generic false positives in 2020 due to there age, but they are false positives

Download
Reviews
AMAI is very, very good. Much better than any Blizzard AI. I love it. ==Update - 25/08/12== It has recently come to our attention that some antivirus softwares like Norton detect a virus in this, however, we can assure you that it is a false...
Read full review...

AMAI is very, very good. Much better than any Blizzard AI. I love it.
==Update - 25/08/12==
It has recently come to our attention that some antivirus softwares like Norton detect a virus in this, however, we can assure you that it is a false detection and that this tool is virus-free.
~The Hive Staff

Models 1 Maps 1
Does this work also with Campaigns as well?

Although you have a little clue on the good strats as you have hardly watched thousands of pro replays, I agree this can be useful only from the point that any imporvement on dumb computers is nice, it would be better if you consulted with someone who is aware of the best strats and add it in the prog. However, who still plays vs PCs anyway? They choose either bnet or some servers to play with people , not computers... and I guess this isn;t made for RPGs to be harder and for melee, thast why I say all this for the melee poinr.

Tools 1 Maps 1
@3.26ly: Best strats are all from a certain point of view. The current strategies are a combination of what makes AMAI work to its fullest (and this aint no small improvement). You can't just put a pro strategy in as AI cannot use the strategy effectivly. The current strategies are the best trade off. If you dont like the built in ones you can make your own.

@Craka_J: Its built for melee but you can modify for mods or campaigns with some work of course. Of course certain game styles are a no no with amai eg DOTA or tower defense etc. But then you have lots of other things at your supposal that easily sort those out.

Maps 1
It isnt working for me. I have extracted the files correctly but i says i am missing blizzard.j but when i looked in the file were i extreacted it from blizzard.j wasnt there. Help me please.

Maps 1
please help me i really want this. It doesnt wok for me it say's i dont have the file blizzard.j but when i look in were i extracted it from blizzard.j ist there either please help.

You have to download Perl
http://www.activestate.com/Products/Download/Download.plex?id=ActivePerl then you can run the AMAIstrategymanager and compile the ai's.

If you dont want to do that go to
http://users.ecs.soton.ac.uk/~lph105/AMAI/?page=download
and download one of the easier to use editions instead of the developer.

Maps 1
Its now saying i need 1stpage.exe and i have perl now.

Tools 1 Maps 1
I dont know what 1stpage.exe is so i can't help you i'm afraid. If you downloaded perl correctly it should have worked.

Skins 8 Maps 1
Where do you put the program if it matters.

Models 2 Skins 1
can somebody explain why the map isn't work after i install the AI on it?

Works for me. Have you guys not even try out it's tools one by one to get the hang of things?

dude my rpg could use this: (orc) GET EM (human) HOLD THEM OFF (orc) FUCK YOUR HOLDING WAYS(human) SHUT UP

on a more wtf? note.... WHAT THE FUCK IS THE PROGRAM TO OPEN IT

is there an thread with all the custom ai's that have bein uploaded? just wondering

User Opinion: Is this even worth my time? Sounds like it would make melee more interesting. BTW careful Ricky, don't dbl post

Perl 5.10 is a recent new version of perl which will not work with AMAI unless you know how to install the tk component using the perl addon manager.

Note this developer edition of AMAI is for "Developers" and less so for those who just want to play against an advanced AI. You should download the Single Edition or Player Edition as the developer edition is for modifying the AI hence why it is in the tools section.

Maps 1
nope. I robot/terminator you name it. Never going to happend ^^ As in both some master server learn to think like a human, which is unable to be done

@Revan: Indeed the technology does not exist yet (especially to make something more clever than its creator). But never say never

Maps 1
Haha XD overall humans are 10 times more afdvanced. Btw what makes this so much better than the original AI editor?

this is exactly what I need for my map! thanks!!!

VicHardy said:
can somebody explain why the map isn't work after i install the AI on it?
Click to expand...

Maybe you need a update on you warcraft or there is an Ai startup error when anti virus protected it which means code can't be read by the Anti virus causing immediate End task manager/ restart/ Pop up saying virus.....
This can be prevent by offing your anti virus or updating your warcraft map
If does not work.. well seek other pros.....

I hate those f*cking bots because they steal mah' tomes

Strategy manager closes when i start it up i have pearl and all the other things but im running windows vista is there something i must do to enable CMD programs?

Have no problems with mine in Vista.

Not you need to install "Active Perl" and choose the older release of them there are 2, I think AMAI dont work with the newer one.

Not bad.
Thats the only thing i have to say.
Bye

Ricky said:
please help me i really want this. It doesnt wok for me it say's i dont have the file blizzard.j but when i look in were i extracted it from blizzard.j ist there either please help.
Click to expand...

You can't double or triple post moron, use edit on your posts. Next time please read the rules before you sign up please.

There you find the right Perl..
And this looks good, the only thing i need now, is to test it.. ^^

Tools 1 Maps 1
Hey all. Update has been released to support the latest version of warcraft.

Tools 1 Maps 1
@Azxz: AMAI contains a full manual in the "manual" folder. Will open in your webbrowser. Or you can view online copy at the official amai website.

Icons 1 Maps 1 StarCraft II Resources 5 Tutorials 8
*sigh* I can't believe that great tools are rated down because noobs don't know how to use them.

Stathisdjs said:
*sigh* I can't believe that great tools are rated down because noobs don't know how to use them.
Click to expand...

It only has 2 votes. Why didn't you just give it a 5 rating?

Tools 1 Maps 1
@Sun_Knight: This tool does not come with malware. The grimoire tool included is often prone to throwing false positives with some antivirus programs.

Spells 3
What is that fucking Language??
You must log in or register to reply here.

[General] How can I make a advanced AI?