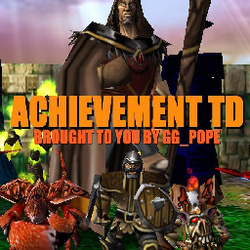 Pure Nature no longer costs an additional 1000g.
If a computer player is accidentally added he should no longer win the damage test with 0 damage.
You can now lose lives from Minions of Aendri if your portal has been moved by the Shiny Orb.
Buildings now refund in full when cancelled.
The interval that checks for when the next wave should begin has been reduced to stop selling during that interval and earning more interest.
Achievement #42 will now display on the achievements list.
Some unused objects were removed from the game to reduce size slightly.
A bricksmithing guide was added to the quest log.
Items will no longer drop off of Dave, Shade of Arche and Aendri.
New item for the Panda boss fights - Ibos Mask. The chance of getting a net has been reduced slightly. (from 50% to 33%)
Fixed some tooltip errors.
If you have three items in your inventory and use Combine, Break Down will no longer activate.
The Chillwind Tower no longer slows.
Enemies will no longer spawn for computer players.
Custom minimap image added.
The follow waves have had their difficulty reduced: 21, 30, 39, 40, 41, 42, 43, 44, 45
Impossible mode no longer exists. The achievement for playing the game on Impossible has been replaced with playing the game on Extreme.
Creating Pure Earth now gives the Ultima achievement.
The size of Minions of Dave and Elite Minions of Dave has been reduced.
Itemized now displays a message when you earn it.

NOTE: GG_Pope = ZiggyMcjoney = Arche = Vantuex. All of those are different names for the same person. This map is my own creation

The objective of this TD is no different to any other TD - protect your portal at the end of the maze from waves of mobs by building towers. However, this TD has many differences from your standard tower defense. To upgrade towers, you must spend achievement points.

How do you earn achievement points? Tonnes of ways - building certain towers, completing certain bonus waves, killing certain numbers of units, almost anything. This TD is heavily strategic - to beat the more difficult modes players will have to learn the strengths and weaknesses of their towers, the combinations of towers they want to build and when to build them. It's a challenging experience, but success is very rewarding in this map!

This TD currently features over 100 towers, 42 achievements and 45 waves. Certain waves have bonus features, such as units you have to save, damage tests and even a boss that tries to pull the portal further through your maze! Learn to overcome these challenges and you'll have great success in the world of Achievement TD.

Thanks to:
Aendri - For map testing, ideas and comic relief
Dave - For not testing the map when we wanted him to and letting me make him a prawn in the storyline.
Gnollking - For his constant willingness to test the map because he's too lazy to do anything else, and his l33t skills making balancing the map a breeze.
Lokilokii - For losing his RoC CD and being unable to play TFT.
rappunk23 - For ideas and support

DeathWing - For ideas and inspiration
Vexorian - For his awesome map optimizer
The general community of TheHelper.net for it's awesome assistance whenever I needed it.

Have fun! Replays, bug reports and damage test figures are much appreciated <3

Moderator
04:26, 16th Sep 2009 ap0calypse: Approved I've played it for quite a while and I must say it's a really good map. Achievements are pretty common these days, but it doesn't bother me... I like them. Also a nice touch of humour to it (good...
Read full review...
Reputation Statistics
Page 1 of 2
Show Ignored Content
Page 1 of 2