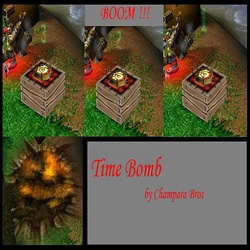 This is my goblin time bomb which counts three seconds. It sadly has the custom texture because I was unable to find texture with number 1 with black background. If you like it credit me in you work.

You should base the bomb ability of Pocket Factory. Create unit in Editor and give it AOE damage upon death. You should set Data Factory Unit to your Bomb and set its duration to 3.5 !!!

Set the scaling as you want.