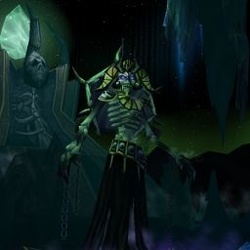 Undead Campaign: Path of the Damned
A project by The-Spoon

This pack is part of my "2 Player Campaign" project.
If you wish to report a bug, reply with feedback, or find out more about the project, please visit the Hosted Forums.

Description:
In my project, I aim to create an edition of every level of the campaign so that 2 players can play co-operatively to beat the campaign. But also to add a few of my own ideas in there too!

Features:
- A save/load code system found in ORPGs to record items/abilities between levels.
- Score system, where at the end of the level you get a grade A-E, based on how well you did.
- The interludes are incorperated into the map, so you don't have to download a seperate map to watch a video.
- Original heroes for when there is only 1 hero on the level.
- All the levels will be set to 'hard mode', but with help from your team-mate it should all be reasonably possible
- Shared research and techtree systems with your ally.
- Optional Insane Mode (for those real pros!)
- And more!

Contains 8 edition's of Blizzard's Undead Campaign:
Chapter 1: Trudging through the Ashes
Chapter 2: Digging up the Dead
Chapter 3: Into the Realm Eternal
Chapter 4: Key of the Three Moons
Chapter 5: The Fall of the Silvermoon
Chapter 6: Blackrock & Roll, Too!
Chapter 7: The Siege of Dalaran
Chapter 8: Under the Burning Sky

Moderator
20:20, 29th Aug 2010 DonDustin: those maps are really enjoyable. If you liked the campaing in single palyer, you will love to play it in multiplayer with a good friend or with someone here. :)
Read full review...
Reputation Statistics
Page 1 of 2
Show Ignored Content
Page 1 of 2