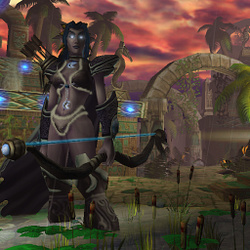 Chapter Six: Shards of the Alliance
’Three days later, on the western coast of Lordaeron, the night elves venture cautiously into the shifting shadows of Silverpine Forest.’

Insane Mode: A Dreadlord leads the random attack waves. The Dreadlord becomes more powerful each time you slay him. / Several enemy units are replaced by stronger units. / Kael has Periapt of Health instead of Khadgar’s Gem of Health and Potion of Healing instead of Potion of Greater Healing. / Heroes receive much less experience from kills.

Useful Links: You can view the full list of credits here. / You can read the complete list of systems, mechanics and commands here. / If you want to be notified automatically when a new map of the 2 player campaign is released, subscribe to the thread found here.
Changelog
1.01
7 October, 2011
Due to many complications, the path of the caravan is now picked by typing -left or -right. The path of the caravan is also selected randomly after 30 seconds if no path is chosen. / Fixed a bug where the 'Retrieve Supplies' quest (and its multiboard) would not update if the second player picked the gold coin. / The location of the supply caches for the 'Retrieve Supplies' quest are no longer revealed to the player.
Special thanks to Skasian!
1.02
14 August, 2013
Updated the lobby interface to better show which heroes you'll be playing.
1.03
3 January, 2019
Fixed crashes at the beginning and end of the game on newer patches.