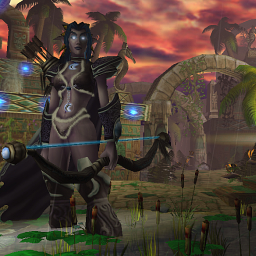 This bundle is marked as approved. It works and satisfies the submission rules.
View usage Statistics Legacy download
Reactions: Redsteel1 and BotLoot
Sentinels Campaign: Terror of the Tides
Based on the work of The-Spoon and Blizzard Entertainment.

Chapter Two: The Broken Isles
"The next day, on the shores of a mysterious island chain, Maiev and her Watchers inspect some ancient, yet strangely familiar ruins."

Insane Mode: The AI of Naga Strikeforce and Illidan's Servitors are improved.

Useful Links: You can view the full list of credits here / You can read the complete list of systems, mechanics and commands here. / If you want to be notified automatically when a new map of the 2 player campaign is released, subscribe to the thread found here.
This version recognizes the loading codes generated by version 1.00 maps as valid. / Bounty is now split. / The heroes' levels, stats and skills are now displayed at the start and end of the map using a Multiboard. / Saithis now has an ultimate. / Twilight Guardian now lists its damage and hit point values correctly. / Saithis' hotkeys finalized. (Blade Shield; Shift; Summon Twilight Guardian; Maiden of Pain) / The Staff of Preservation may now be used on allies. / A severe issue that allowed players to skip cinematics prematurely has been fixed. / The maps now use a higher resolution map preview so as to look better when uploaded to the Hiveworkshop.
16 April, 2011
A minor cosmetic adjustment to when the game begins.
22 May, 2011
Blade Shield now spawns correctly. / A typo in the learn tooltip of Blade Shield fixed. / Maiden of Pain replaced by Eclipse. / Twilight Guardian reworked. / Saithis has a new icon. / A cinematic issue fixed where Illidan would drop his Orb of Kil'jaden and players could pick it up.
Special thanks to indomitable1319!
14 July, 2011
The AI of Naga Strikeforce and Illidan's Servitors updated to run more efficiently. / The "gold mine is running low" message is now sent at 750 gold remaining. / Fixed the level skip requirement of Blade Shield. / Fixed a serious issue with Twilight Guardians that could sometimes create permanent units. / The Goblin Merchant will now properly sell items. / Summons can no longer be raised by Twilight Guardians. / Bounty is no longer granted by summons. / Fixed a number of visual and audio glitches and problems.
Special thanks to KhalanDuriant!
17 July, 2011
Fixed an issue where the "<Player> wishes to skip the cinematic!" message would display every time the player pressed Escape.
Special thanks to Snow von Porges!
14 August, 2013
Updated the lobby interface to better show which heroes you'll be playing. / Scroll of Town Portal will now transport both players' units inside the area of effect. / Scroll of Town Portal now only costs 175 gold.
3 January, 2019
Fixed crashes at the beginning and end of the game on newer patches.

Packs 4 Maps 52 Spells 1
The Sentinel Campaign created by McQvaBlood is completely supported by me and the 2P Campaign hosted forum on hiveworkshop.

The maps are of good quality as mine, and if you like the series - be sure to have a play!

Maps 1
Woot the first base building mission.. The insane update looks good, I guess it must be my friend and I who are such good ladder players to beat this =p

Packs 4 Maps 40
This map is now updated to version 1.02.
Read the Changelog for the complete list of changes.

Maps 1
Yay for cosmetic adjustment! BTW blood do you know how soon till we see mission 5 balancing the scales? =p

Packs 4 Maps 40
This map is now updated to version 1.03.
Read the Changelog for the complete list of changes.

Packs 4 Maps 40
As I read through your posts, it became clear to me that most of your difficulty problems are because you're playing on normal mode and for the most part, I was only testing insane mode. For example, the Drak'thul side-quest features a number of stationary guards near each Ziggurat, making it impossible to destroy using just two heroes.
Also, the Naga Guards at the end of the map are replaced by Royal Guards, a total of six, which are extremely hard to defeat, once again, only if you are playing on insane.

However, my failure to test if the normal maps are hard enough should not be a concern for you. Instead, I would be more than happy to discuss how normal could be made a bit harder without making it too hard. Please, open a thread with your ideas in the hosted project forums.
I'm also thinking about introducing a new difficulty: What is currently normal would become easy, normal would be a bit harder, this is where you could help me, and insane would remain the same.

Maps 2
Is your project still going on?
More then that , is the RoC project going on?

Packs 4 Maps 52 Spells 1
I'll be back to working on RoC during the holidays I hope.
Not sure about McQvaBlood

Been eagerly waiting for so long

Packs 4 Maps 40
Well, I still have an exam tomorrow (25th), then I won't have much to do until the 8th of February, I'll complete Sentinel 7 in that - rather short - window of free time. Hopefully.
You must log in or register to reply here.