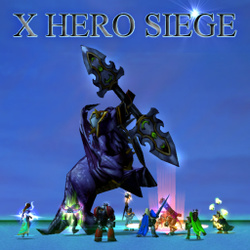 Objective:
Select your hero, defend the castle and kill all dark forces.

Changes 3.33:
- Added a new item "Scepter of Mastery" with "Banish" to increase spell damage on single targets.
- Added "Storm", "Earth" and "Fire" as alternative models for "Sorceress", "Tauren Chieftain" and "Blood Mage" (selection: one-click 1 of the 3 heroes then press the down-arrow on keyboard).
- Fixed bug: Level 20 Ability is not added to "Druid of the Clow" in "Bear Form".

Moderator
19:16, 28th Oct 2008 Septimus: This is 1 of my most favourite hero defense map back at the good old day, the only annoying part of this hero defense is only playable by 4 player. Try to play more than 4 player and a great fight between the player...
Read full review...
Reputation Statistics
Page 3 of 3
Show Ignored Content
Page 3 of 3