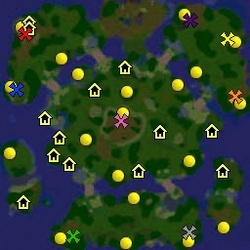 Map Info
WoW Legion is a altered melee map like LTA and Azeroth Wars. It is in young state but will be updated over the course of time feedback is highly appreciated

[/color]
WoW Legion comes with unique features and manymore to come such as events to get bases or heroes or even new legendary weapons such as the Ashbringer or Doomhammer. It offers 9 factions (6 currently) The 9 are the cult of the Twilights Hammer, The Burning Legion. Gul'Dan and the fel orcs. Storm wind and their reenforcements (Reenforcements is current place holder to other faction) The Night Elves. Thrall Horde and many others. 6 factions are ally but will get events to go solo but go stronger. 6 Allies together sounds strong but against the might of the burning legion and the old gods needs the factions of Azeroth to unite!

1.1: The Twilight Hammer Update
Reworked the clan and gave them a altar, A twilight dragon roost and a Faceless spawning pit training Faceless Executioner and Faceless Guardian it gave the clan a new starting zone and makes it look more creepy.

1.2&1.3: Balance and Bugs:
Fixed a lot of bugs that ruined the game such as the strange pricing.I didn't focus that good on the pricing so I fixed almost all the prices. Legion got a tower. And new starting zone along the Fel Orcs. Made a creep cramp above the legion starting area. Fixed some bugs and added Varian Wrynn to aid storm wind

1.4,1.5&1.6: Highmountain and bug hunt.
Fixed ALOT of the current bugs making it playable and added Highmountain

Also thanks to:Blizzard Entertainment For the inspiration of the map and creating the game.
Icons & Models :Hive Modelers

Moderator
20:22, 4th Nov 2015 StoPCampinGn00b: Hi Meez. Based off of you're description, it seems like your map is significantly unfinished and is still alpha or beta. Those types of map aren't allowed to be approved just yet, so I advise you to go post this...
Read full review...
Reputation Statistics
Show Ignored Content